The former Union and New Haven Trust Building, located at 205 Church Street in New Haven, Connecticut, was the tallest building in New Haven when it was constructed in 1927. This Georgian-Colonial Revival skyscraper was designed by architects Cross and Cross. The building, sited on the northeast corner of the historic New Haven Green, changed hands several times over the years. In 2014 it was converted into residences and renamed The Union.

Situated on the corner of Elm and Church streets, the site was the home of Richard Perry in the 1640s, who served as secretary to the General Court of the Colony of New Haven.

The Union Trust Company moved its headquarters to Stamford in 1981, but kept a branch on the ground floor. The bank was purchased in 1995 by First Union Corporation, which later took the name of its Wachovia acquisition and in 2010 merged into Wells Fargo. The building's ground floor is still occupied by a Wells Fargo branch. 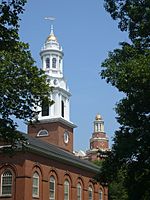 United Church with Union and New Haven Trust Building in background; The Union building's cupola is a tribute to the Church's golden dome.

Leasing at The Union commenced in spring 2015. The building includes 138 studio, one-bedroom, and two-bedroom apartments.

All content from Kiddle encyclopedia articles (including the article images and facts) can be freely used under Attribution-ShareAlike license, unless stated otherwise. Cite this article:
Union and New Haven Trust Building Facts for Kids. Kiddle Encyclopedia.