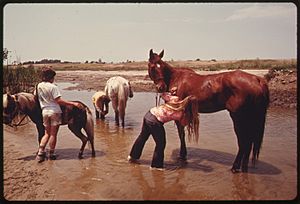 The Upper Newport Bay (known locally as "The Back Bay") is a large coastal wetland (an estuary) in Newport Beach, Southern California and a major stopover for birds on the Pacific Flyway. Dozens of species, including endangered ones, can be observed here. Upper Newport Bay Nature Preserve and Ecological Reserve represent approximately 1,000 acres (4 km2) of open space. The Upper Newport Bay was purchased by the state in 1975 for its Fish and Wildlife Department's Ecological Reserve System. In 1985 the upper west bluffs and lands surrounding the bay became part of an Orange County regional park, which offers outdoor activities such as bird-watching, jogging, bicycling, hiking, and kayaking. The Peter and Mary Muth Interpretive Center, located at 2301 University Drive, is open to the public Tuesday through Sunday from 10:00 AM to 4:00 PM. An organization known as the Newport Bay Conservancy (NBC) provides volunteers to answer visitors' questions and guide them through the various activities.

The bay is recognized for protection by the California Bays and Estuaries Policy.

The main tributary of the Upper Newport Bay is San Diego Creek, which flows past the San Joaquin Wildlife Sanctuary before entering the bay. The bay is connected to the Pacific Ocean through the lower Newport Bay, the harbor of Newport Beach.

All content from Kiddle encyclopedia articles (including the article images and facts) can be freely used under Attribution-ShareAlike license, unless stated otherwise. Cite this article:
Upper Newport Bay Facts for Kids. Kiddle Encyclopedia.