Urraca Mesa is a large mesa located in Colfax County in northern New Mexico, U.S., on the property of Philmont Scout Ranch. It reaches an elevation of 8,594 feet (2,619 m). The mesa has a long history of mythical and supernatural associations, dating to the local indigenous tribes.

The name comes from the Spanish word for magpie from ancient Native American legends.

The mesa is covered in Ponderosa pine. Black bears, wild turkeys, deer and mountain lions are among its inhabitants.

Urraca Mesa is relatively flat with the exception of a protruding plateau, which contains a freshwater source. It is known for having the highest number of lightning strikes anywhere in New Mexico. 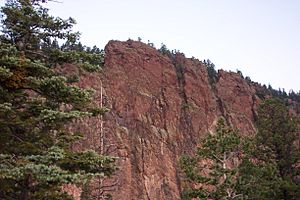 A nearly vertical cliff that makes up part of Urraca Mesa

All content from Kiddle encyclopedia articles (including the article images and facts) can be freely used under Attribution-ShareAlike license, unless stated otherwise. Cite this article:
Urraca Mesa Facts for Kids. Kiddle Encyclopedia.