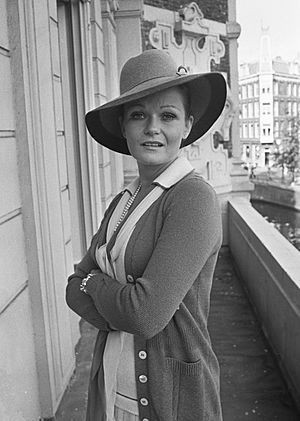 Valerie Perrine (September 3, 1943) is an American model and actress. She has been nominated for Academy Awards and Golden Globe Awards. She played Marcy, the wife of a corrupt policeman, in the 1982 movie The Border. She played Miss Eve Teschmacher in certain Superman movies, and Mona in Boiling Point, a 1993 thriller movie.

Perrine was born in Galveston, Texas.

All content from Kiddle encyclopedia articles (including the article images and facts) can be freely used under Attribution-ShareAlike license, unless stated otherwise. Cite this article:
Valerie Perrine Facts for Kids. Kiddle Encyclopedia.