The Valley Lake is a monomictic volcanic crater lake in the Australian state of South Australia situated in the south of Mount Gambier, near the Blue Lake. The Lake is surrounded by a park situated on Davidson Drive. The shore of the lake features a children's playground, sporting facilities, BBQs and toilets. There is also a Conservation Park, as well as Centenary Tower at the top of the surrounding crater. 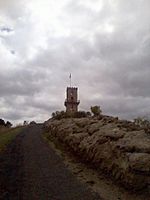 When Mount Gambier was first discovered in 1839 by Stephen Henty of Portland, the Valley Lake and the Blue Lake were considered a good source of water for future settlers.

The foundation stone for the Centenary Tower was laid on 3 December 1900 (to commemorate the 100th anniversary of the sighting and naming of Mount Gambier), and was officially opened in 1904. The tower sits 190 meters above sea level, and its opening hours are signified by a flag flown above the tower. At night the tower is lit up and can be viewed from the city.

On 26 February 1954 Queen Elizabeth II visited the Valley Lake as part of her Australian tour. A plaque commemorating this visit was placed at the Valley Lake Lookout in 1977.

The Valley Lake Conservation Park operates within the Valley Lake park. The Park is home to a number of indigenous flora and fauna species. It also features lookouts, a beautiful boardwalk and a number of nature walks, and entry is free.

All content from Kiddle encyclopedia articles (including the article images and facts) can be freely used under Attribution-ShareAlike license, unless stated otherwise. Cite this article:
Valley Lake (South Australia) Facts for Kids. Kiddle Encyclopedia.