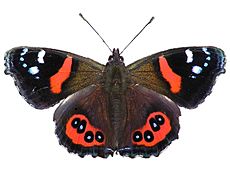 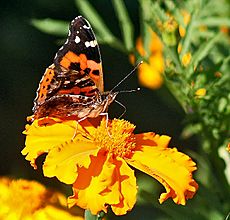 The red admiral (Vanessa atalanta) is a well-known colourful butterfly, found in temperate Europe, Asia and North America. It has a 45–50 mm (1.8–2.0 in) wing span. The species is resident only in warmer areas, but migrates north in spring, and sometimes again in autumn.

In northern Europe, it is one of the last butterflies to be seen before winter sets in, often feeding on the flowers of ivy on sunny days. The red admiral is also known to hibernate, re-emerging individuals showing prominently darker colourings than first brood subjects. The butterfly also flies on sunny winter days, especially in southern Europe.

In North America, the red admiral generally has two broods from March through October. Most of North America must be recolonized each spring by southern migrants, but this species over-winters in south Texas.

Other red admiral species are: 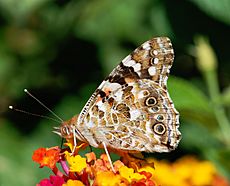 The painted lady, showing the underside of wings

The painted ladies are a subgenus Cynthis of the red admirals. The topside of their wings is mostly orange in colour.

The painted lady in the UK migrates south in the winter. This has been proved by tracking them on radar. They fly at high altitude on a 9,000-mile migration. It could take up to six successive generations for the species to complete a 9000 mile (14,400 km) round trip from tropical Africa to Europe.

All content from Kiddle encyclopedia articles (including the article images and facts) can be freely used under Attribution-ShareAlike license, unless stated otherwise. Cite this article:
Red admiral Facts for Kids. Kiddle Encyclopedia.