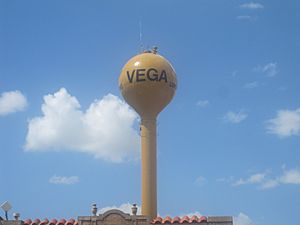 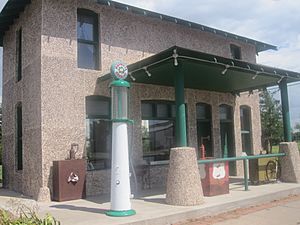 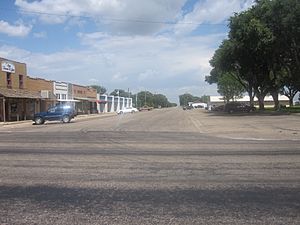 Downtown Vega, with courthouse to the right and City Hall to the left

In 1879, the area was opened by the state for homesteading. The first settler, N.J. Whitfield, arrived in 1899. On October 17, 1899, he purchased an area of Oldham County known as 'Section 90' for $1.00 per acre. In 1903, Whitfield sold a 100-foot strip of land that extended across the southern part of Oldham County to the Choctaw, Oklahoma, and Texas (later Rock Island) Railroad as a right-of-way. He then sold portions of land on the south side of the right-of-way to other settlers. A.M. Miller and Howard Trigg surveyed the town site that eventually became Vega in May 1903. The name Vega, which is Spanish for "meadow," was chosen because it reflected the vast prairie and surrounding countryside of the area. Soon after, Miller opened a store, and a post office, saloon, and a school that doubled as a Masonic Lodge were built in the community. In 1907, ranchers Patrick and John Landergin purchased a part of the LS Ranch from Swift & Company. Working in association with the Amarillo-based Pool Land Company, the Landergin brothers brought more prospective settlers to the community. The following year, they established a bank in Vega. When the railroad was completed, Vega began to thrive. There were several stores, a blacksmith, two churches, and a newspaper – the Vega Sentinel – operating in the community by early 1909.

The nearby town of Tascosa, which was designated Oldham County seat in 1880, declined in both importance and population as Vega grew. A five-year battle over which community should serve as Oldham County's seat of government was put to a vote in 1915. In the special election, citizens chose to move the county seat from Tascosa to Vega. Until a permanent courthouse was built, county business was conducted in Vega's Oldham Hotel.

Modern amenities, such as telephone service, were introduced during the 1920s. In 1926, Route 66 (superseded by Interstate 40) was commissioned as a link from Chicago to Los Angeles and ran through Vega along the Old Ozark Trail. The arrival of Route 66 provided an economic boost for the community. The Route 66 heritage is honored by a restored Magnolia gasoline station located adjacent to the courthouse, which appears as it would have in the 1920s or 1930s.

Vega was officially incorporated in 1927, and the population was 519 in the 1930 census. On May 3, 1931, a fire destroyed six buildings west of the courthouse square. Two months later, a second fire burned two buildings on the north side of the square. These fires prompted the town to establish a municipal water system.

According to the Köppen Climate Classification system, Vega has a semi-arid climate, abbreviated "BSk" on climate maps.

There were 378 households out of which 31.2% had children under the age of 18 living with them, 58.7% were married couples living together, 12.7% had a female householder with no husband present, and 27.0% were non-families. 24.6% of all households were made up of individuals and 13.5% had someone living alone who was 65 years of age or older. The average household size was 2.46 and the average family size was 2.93.

All content from Kiddle encyclopedia articles (including the article images and facts) can be freely used under Attribution-ShareAlike license, unless stated otherwise. Cite this article:
Vega, Texas Facts for Kids. Kiddle Encyclopedia.