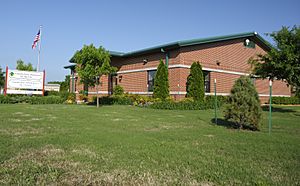 Verdigris is an incorporated town in Rogers County, Oklahoma, United States, in the Tulsa metropolitan area. It straddles former U.S. Highway 66 (now State Highway 66) between Catoosa and Claremore. Verdigris had a population of 3,993 at the 2010 census, an increase of 92.9 percent from 2,070 at the 2000 census.

Verdigris is named after the nearby Verdigris River, so named by French Traders that settled in the area around the late 1700s. Several Native American tribes, including the Osage, Delaware and Cherokee, had populations along the Verdigris River. The rural community known as Verdigris has been in existence since before Oklahoma statehood in 1907. The St. Louis-San Francisco Railway (Frisco) referred to the area as the "Verdigris Switch" in the late 1880s. Verdigris schools were founded in the early 1900s. America's Mother road, U.S. 66, was routed through Verdigris in the late 1920s.

The community was named for the Verdigris River; the river name derives from French terms for "green" and "gray." Verdigris is the fastest growing municipality in Rogers County. The growth rate between 2000 and 2010 was 119%. The population at the 2010 census was 3,993.

In Kurt Vonnegut's short story Armageddon in Retrospect, published in his final book of the same name, Verdigris is featured as the headquarters of the United Nations Demonological Investigating Committee, or UNDICO.

All content from Kiddle encyclopedia articles (including the article images and facts) can be freely used under Attribution-ShareAlike license, unless stated otherwise. Cite this article:
Verdigris, Oklahoma Facts for Kids. Kiddle Encyclopedia.