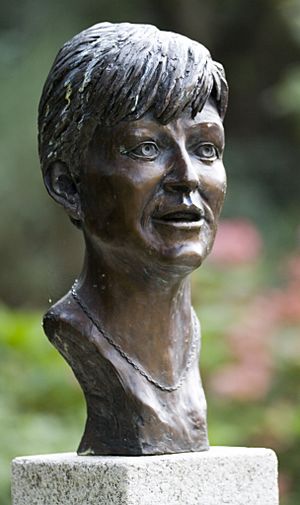 Veronica Guerin (5 July 1958 - 26 June 1996) was an Irish journalist who was born in Dublin. She was murdered by Irish drug dealers. Her death made many Irish people angry, which brought down many drug dealers on the island. The criminal John Gilligan was later convicted of her murder and sentenced to 28 years in prison, though Gilligan said in High Court that it was his friend John Traynor who murdered Guerin.

All content from Kiddle encyclopedia articles (including the article images and facts) can be freely used under Attribution-ShareAlike license, unless stated otherwise. Cite this article:
Veronica Guerin Facts for Kids. Kiddle Encyclopedia.