The Victoria Park Nature Reserve is a protected nature reserve that is located in the Northern Rivers region in the state of New South Wales, in eastern Australia. The sub-tropical jungle remnant is located an undulating high rainfall plain near Alstonville. The red-brown soil is derived from a basaltic flow from the nearby Mount Warning. Of the total land in the reserve, 8 hectares (20 acres) is original rainforest; and the other areas are being re-vegetated. 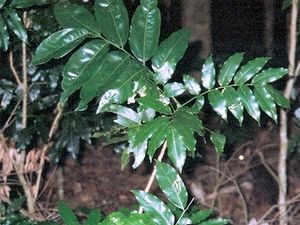 Rainforest understorey at Victoria Park Nature Reserve, with a juvenile black bean and an illuminated eye of the red-legged pademelon from the camera's flash (bottom right).

The reserve is one of a few small nature reserves including the Andrew Johnston Big Scrub, Hayters Hill, Davis Scrub, Boatharbour and Wilsons Peak flora and nature reserves that conserve rainforests typical of the once extensive Big Scrub. The Big Scrub comprised 75,000 hectares (190,000 acres) of lowland subtropical rainforest which was largely cleared for agriculture in the late 19th century.

Victoria Park is a popular area for picnics and barbecues. There is wheelchair access, a wooden boardwalk, pit toilets, tables, gas barbecues and information boards.

In this small area, a large diversity of flora exists. 82 tree species are included amongst the 152 plant species. Many types of vines, smaller plants and fungi grow here. Most of the animals are nocturnal, though red-legged pademelons are sometimes seen on the edges of the grassy area. Rainforest pigeons such as the wompoo fruit dove are often heard, but rarely seen. Land mullets may be heard crawling on the rainforest floor.

A tourist attraction in the early 20th century was a giant Moreton Bay fig, around 60 metres (200 ft) tall. Allegedly sighted by Captain Cook from HMS Endeavour in 1770. The tree was damaged by a storm in 1970 and died soon afterwards.

Re-vegetation of the previously cleared farmland is under progress. However, the removal of original jungle vegetation has caused a lack of soil nutrients. Despite this, wildlife corridors are slowly being created to link other nearby rainforest remnants.

All content from Kiddle encyclopedia articles (including the article images and facts) can be freely used under Attribution-ShareAlike license, unless stated otherwise. Cite this article:
Victoria Park Nature Reserve Facts for Kids. Kiddle Encyclopedia.