Vision of Peace (Indian God of Peace) facts for kids 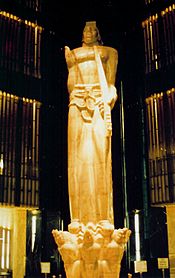 The Vision of Peace is a statue in the three-story memorial concourse lobby along the Fourth Street entrance of the Saint Paul City Hall and Ramsey County Courthouse in Saint Paul, Minnesota, United States. The memorial to Minnesota 20th-century war dead was created by Swedish sculptor Carl Milles. He drew on memories of a Native American ceremony he witnessed in Ponca City, Oklahoma, when he designed the statue, Indian God of Peace. Although there is no connection between Native American spirituality and his own vision, Milles depicted five Native Americans seated around a fire and holding their sacred pipes. Emerging from the smoke of those pipes is a “god of peace” which Milles imagined speaking to “all the world.”

The statue was unveiled on May 28, 1936, as the Indian God of Peace. Originally there were 340 names to commemorate those who died in World War I. In 1988 the VFW started a funding campaign to add names of Minnesota soldiers who died in combat from other wars such as World War II, Korean War and the Vietnam War. There are 1,578 names engraved of those lost to war. It was later renamed Vision of Peace in 1994 at a special community ceremony involving three major Minnesota Native American tribes.

The statue weighs approximately 60 tons, stands 38 feet high, and was carved from creamy white Mexican onyx using Milles’ full-scale model. The statue sits on a revolving base which turns the figure 132 degrees every 2.5 hours. There are 98 sections fastened to a steel I-beam and supported by three-quarter inch bronze ribs.

All content from Kiddle encyclopedia articles (including the article images and facts) can be freely used under Attribution-ShareAlike license, unless stated otherwise. Cite this article:
Vision of Peace (Indian God of Peace) Facts for Kids. Kiddle Encyclopedia.