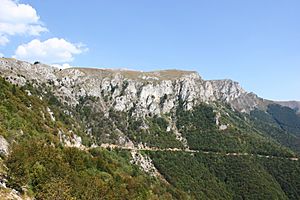 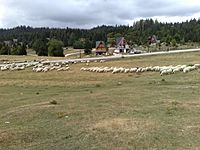 Vlašić (Влашић) is a mountain in Dinaric Alps. It is in the very center of Bosnia and Herzegovina. Its highest peak is Paljenik with an elevation of 1,943 m. It is famous for its pastures, cattle-breeding and cheese. It overlooks the town of Travnik.

The mountain is named for the Vlassi people (called Vlachs in Bosnia). They tended their sheep there since the end of the Roman Empire. They brought one of the trademarks to the area, Vlašić cheese, about the year 1,000. Originally they used sheep milk but later used milk from cows. It is left to ripen for up to three months. The area is also known for the Tornjak dog and Pramenka sheep. The Tornjak is believed to have existed for more than a thousand years. They are bred to guard the sheep from wolves and bears. The Tornjak's name comes from the Croatian word tor which means "a fenced area for sheep."

All content from Kiddle encyclopedia articles (including the article images and facts) can be freely used under Attribution-ShareAlike license, unless stated otherwise. Cite this article:
Vlašić (mountain) Facts for Kids. Kiddle Encyclopedia.