Waikanae railway station in Waikanae on the Kapiti Coast, New Zealand is the terminal station on the Kapiti Line for Metlink's electric multiple unit commuter trains from Wellington. The railway is part of the North Island Main Trunk line that connects Wellington and Auckland.

Waikanae is the northern terminal for Kapiti Line commuter trains operated by Transdev Wellington under the Metlink brand operating between Wellington and Porirua or Waikanae. Services are operated by electric multiple units of the FT/FP class (Matangi). Two diesel-hauled carriage trains, the Capital Connection and the Northern Explorer, pass through the station. The Capital Connection stops at Waikanae but the Northern Explorer does not. 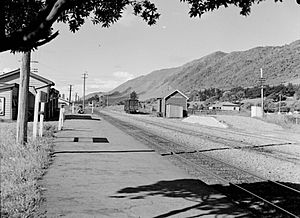 The station was opened in 1886, and was on the Wellington-Manawatu Line from Wellington to Longburn, built by the Wellington and Manawatu Railway Company (WMR) and provided both passenger and freight services. The Waikanae to Ōtaki contract, for 8 mi (13 km) to the north, was let to Messrs Wilkie and Wilson. To the south, Alexander and Macfarlane, of Whanganui had the last contract to be let, the 10 mi (16 km) Paikakariki and Waikanae section. The last spike ceremony was performed on 3 November 1886 at Otaihanga. The first through train from Wellington to Palmerston North ran on 30 November 1886. Waikanae was in the December 1886 timetable as a flag station. The railway has been part of the North Island Main Trunk (connecting Wellington and Auckland) since 1908.

The Wellington suburban electrified commuter service was extended from Paraparaumu to Waikanae on 20 February 2011. The new service was opened with ceremony on 19 February at Waikanae. Minister of Transport Steven Joyce and Ōtaki MP Nathan Guy drove the last spike. Guy's great-grandfather was chairman of the WMR when the last spike was driven in 1886. The ceremony was marked by protests against the proposed Kapiti Expressway, and Ōtaki-based list MP Darren Hughes was cheered for his opposition to the project in favour of rail investment.

The Paraparaumu and Waikanae stations were upgraded at a cost of more than $1 million each in 2010–2011. Upgrading of the original Waikanae station, rather than moving it south of Elizabeth Street or providing a road underpass, was criticized locally on the grounds that frequent closing of the Elizabeth Street level crossing south of the station would increase traffic congestion in Waikanae.

Almost a kilometre south of the station the NIMT crosses the Waikanae River. The original bridge was a 3-span timber truss. In 1925 a fence of old rails was built to protect the bridge, backed by fifteen old square iron tanks (sent from East Town), filled with river bed stones. By 1938 the bridge had been rebuilt in steel and concrete.

All content from Kiddle encyclopedia articles (including the article images and facts) can be freely used under Attribution-ShareAlike license, unless stated otherwise. Cite this article:
Waikanae railway station Facts for Kids. Kiddle Encyclopedia.