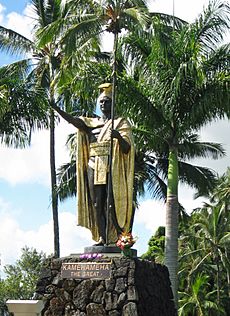 The Wailoa River State Recreation Area is a park in Hilo, on Hawaiʻi Island in the US state of Hawaii.

The 131.9-acre (53 ha) park is administered by the Hawaiʻi Department of Land and Natural Resources. It includes a boat ramp and visitor center with cultural displays. The Wailoa Arts & Cultural Center, founded in 1967, has free admission, but limited hours.

On display is a Kamehameha Statue (although not the original work by Thomas R. Gould) honoring King Kamehameha I, founder of the Kingdom of Hawaii. The statue was originally commissioned by the Princeville resort on the island of Kauaʻi. However, it was put into storage when the local population pointed out that Kauaʻi was the one major island never conquered by Kamehameha in war. An alumni group from Kamehameha Schools raised funds to transport the statue, and put on display in 1997.

The Royal Order of Kamehameha I objected to the first placement of the statue, pointing out that the shorefront has a history of being devastated by tsunamis. In fact, the area of the park was a residential community within Waiākea before the tsunami caused by the 1960 Valdivia earthquake. The state condemned the land and took possession in 1969.

All content from Kiddle encyclopedia articles (including the article images and facts) can be freely used under Attribution-ShareAlike license, unless stated otherwise. Cite this article:
Wailoa River State Recreation Area Facts for Kids. Kiddle Encyclopedia.