Waino is an unincorporated community in the town of Brule, Douglas County, Wisconsin, United States.

Waino was first inhabited by Sioux and Ojibwe peoples, who used the Brule River as a major transportation route. It was the site of the 1842 Battle of the Brule between the La Pointe Band of Ojibwe and a group of Dakota Sioux. Later, in the late 1800s the region was heavily logged, and for a while was the scene of several attempts at copper mining. Finnish settlers arrived starting in the 1890s, and carved dozens of small farms out of the forests.

At one time Waino boasted a cooperative store, post office, Lutheran church, Finnish Socialist hall, and high school. On at least two occasions in the early 1900s, Waino petitioned state and county officials to become its own separate town, but failed on both occasions. 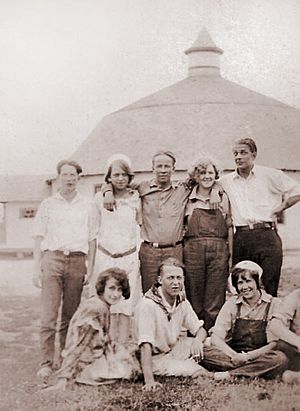 Some of the participants at the July 1927 Young Workers League summer camp in front of Waino's "Round Finn Hall."

Waino's "Round Finn Hall" was the site to a number of gatherings related to the American radical movement in the 1920s and 1930s. The county seat of Douglas County, Superior, as well as the neighboring city of Duluth, Minnesota were in the early 20th Century a regional center of industry, including timber production and shipping, ore docks, commercial shops, and railway yards. The region was a center of Finnish-American immigration in America, with Superior additionally the home of Työmies (The Worker), an official publication first of the Finnish Socialist Federation and from 1922 of the Workers (Communist) Party of America.

Waino and its Round Finn Hall made a close and comfortable location for gatherings of radical Finns in a rural setting. From 1925 and for several years thereafter this was the site of the national summer school of the Communist Party's youth section, the Young Workers League. The Finnish cooperative movement, dominated in the 1920s and early 1930s by Communist Party adherents, also held a number of gatherings and festivals at the location.

In 1932 the Northern Wisconsin Cooperative Park was established in the southern part of Waino. Today it is a campground within the Brule Forest State Park along the Coop Falls section of the Brule River.

Today Waino is part of the town of Brule, four miles north of U.S. Highway 2. The community is home to the Waino Pioneer Chapel, the Ever-Rest Cemetery, the Johnson Auto Garage, a Town of Brule shed, the Brule River Farm, the Brule River Barn Wedding and Event Center, and the Brule Forest State Park.

All content from Kiddle encyclopedia articles (including the article images and facts) can be freely used under Attribution-ShareAlike license, unless stated otherwise. Cite this article:
Waino, Wisconsin Facts for Kids. Kiddle Encyclopedia.