Walcott Inlet is an estuary located in the Kimberley region of Western Australia. It flows into Collier Bay, in the Indian Ocean, via a narrow gap known as Yule Entrance.

The inlet was named on 19 June 1865 by Trevarton Charles Sholl after Stephen Walcott, Commissioner of the Government Emigration Board, while on an exploratory expedition from the short-lived Camden Harbor settlement (in Camden Sound). 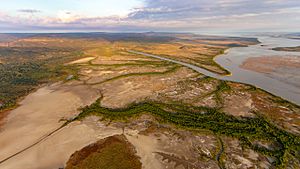 The Isdell River mouth where it enters Walcott Inlet

The name of Yule Entrance is likely derived from a Presbyterian missionary called Dr. John S. Yule, who attempted to create a mission station near Walcott Inlet, which was abandoned soon afterwards by the lay missionaries sent there afterwards, Robert and Frances Wilson, owing to lack of fresh water at the site.

All content from Kiddle encyclopedia articles (including the article images and facts) can be freely used under Attribution-ShareAlike license, unless stated otherwise. Cite this article:
Walcott Inlet Facts for Kids. Kiddle Encyclopedia.