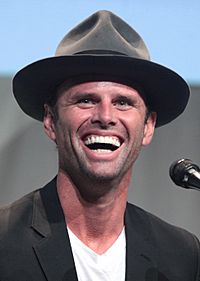 Goggins also produced and starred in the short movie The Accountant (2001), which won an Academy Award for Best Live Action Short Film.

Goggins was born in Birmingham, Alabama. He grew up in Lithia Springs, Georgia. He was married to Canadian businesswoman Leanne Kaun from 2001 until her death in 2004. He married Nadia Conners in 2011. The couple's son was born later that year.

All content from Kiddle encyclopedia articles (including the article images and facts) can be freely used under Attribution-ShareAlike license, unless stated otherwise. Cite this article:
Walton Goggins Facts for Kids. Kiddle Encyclopedia.