Waratah is a north-western residential suburb of Newcastle, New South Wales, Australia, 6 kilometres (3.7 mi) from Newcastle's central business district and bounded to the north by the Main North railway line. Waratah station was opened in 1858 and is served by NSW TrainLink's Hunter line.

Waratah was once a major municipality in its own right, with an elected council and mayor, incorporated in 1871. Two notable mayors, both elected to the office three times each were John Scholey and auctioneer N.B.Creer, both of whom resided at North Waratah (now Mayfield, New South Wales). Scholey was instrumental in the establishment of the Waratah Bowling Club of which he was also patron.

Originally Waratah had as its industrial base a large colliery bearing its name.

The suburb contains a major acute hospital, the Calvary Mater (formerly the "Mater Misericordiae"), owned by the Roman Catholic Sisters of Mercy, who, until recently occupied all the most senior nursing positions. Nearby is an established major 150+ -bed independent Home of the Elderly, Maroba. 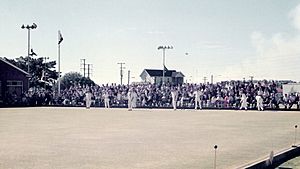 All content from Kiddle encyclopedia articles (including the article images and facts) can be freely used under Attribution-ShareAlike license, unless stated otherwise. Cite this article:
Waratah, New South Wales Facts for Kids. Kiddle Encyclopedia.