Washford railway station is a station on the West Somerset Railway, a heritage railway in England. The station is situated in the village of Washford, which is itself within the civil parish of Old Cleeve in the county of Somerset. 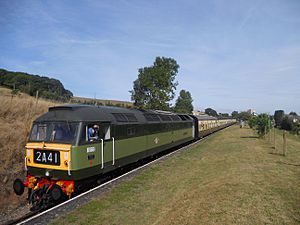 Washford is the second highest station on the line and is situated in a gap between the coastal cliffs and the Brendon Hills. It is accessed by two very steep inclines for steam trains – climbing up from Blue Anchor trains face a 1 mile (1.6 km) section at 1 in 65 (1.5%), the steepest on the line. The station has a single platform on the south side of the line, although there is an extensive yard on the opposite side of the line from the platform which is where the Somerset and Dorset Railway Trust is housed. 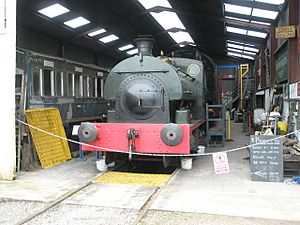 Next to the original stone station building of 1874 is a much smaller wooden building, which originally was the Great Western Railway's signal box. This structure now houses a recreation of the interior of the S&DJR signal-box at Midford. A second signal box is used as part of a signalling display in the yard and was formerly used on the S&DJR at Burnham-on-Sea. 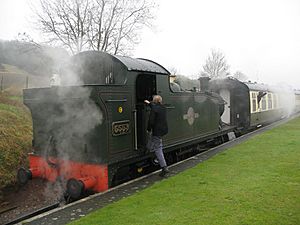 5553 about to restart its train to Minehead

Trains run between Minehead and Bishops Lydeard at weekends and on some other days from March to October, daily during the late spring and summer, and on certain days during the winter.

All content from Kiddle encyclopedia articles (including the article images and facts) can be freely used under Attribution-ShareAlike license, unless stated otherwise. Cite this article:
Washford railway station Facts for Kids. Kiddle Encyclopedia.