Kids Encyclopedia Facts
Not to be confused with Washington County, Illinois.

Washington is a city in Tazewell County, Illinois, United States. Washington is on U.S. Route 24 and Illinois Route 8, northeast of East Peoria. The population was 15,134 at the 2010 census, a 39.6 percent increase over 2000. It is a suburb of Peoria and is part of the Peoria Metropolitan Statistical Area.

Washington was founded in 1825 by William Holland, Sr., who came from North Carolina and was hired by the U.S. government to provide blacksmith services to the local Native Americans. During his long and eventful life he was married three times, and was the father of twenty-one children: fourteen by his first wife and seven by his second wife. He had eighty-two grandchildren and fifty great grandchildren. He died in Washington on November 27, 1871, at the age of ninety-one. The post office (and later the city) was originally named Holland's Grove in 1833 before being renamed in honor of the first U.S. president, George Washington, in 1837.

In the 1920s, a man named George Heyl put Washington on the map as the home of the famous Heyl Pony Farm. Some of the original barns still exist on North Main Street. The Heyl Pony Farm supplied Shetland ponies to buyers around the world; George Heyl also raised pure bred poultry. When Heyl died suddenly in 1932, it was recorded as one of the largest funerals ever held in Washington.

Another local site of interest is the "old canning factory", which is now occupied by American Allied Railway Equipment Company Inc. In 1943, the canning factory (which after the war was run by the Libby's company) had a shortage of workers, and the government needed K rations and canned goods to feed the troops. So 50 captured German soldiers from the prisoner of war camp known as Camp Ellis in Fulton County were brought in. The Washington sub-camp was first commanded by Colonel John S. Sullivan, and later by Captain T. A. Cox. The POWs were brought in on the old rail line that ran down Wood Street (the foundation of a sentry tower can be seen just northeast of the intersection of Wood and Jefferson near the entrance to the bike trail). They were trucked from the camp to various local farms to help with the pumpkin harvest. The prisoners were allowed no visitors, nor could residents speak to the prisoners. An exception was made for local ministers, such as Pastor Kammeyer from St. Mark's Lutheran who spoke fluent German and ministered to the POWs spiritual needs. Once a POW jumped from a truck going down South Main Street and was almost shot before the guard realized he was just trying to retrieve his hat which had blown off.

Years later when the Libby plant burned, they found a U.S. Army rifle issued to a soldier who was a guard. It was reported missing, and suspected hidden by a prisoner.

A new assisted living center for seniors was opened in early 2008, across the street from the Washington Christian Village. 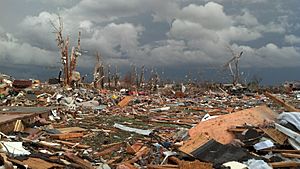 Damage to houses and trees shortly after the November 17, 2013 tornado.

One of the two EF4 tornadoes in the November 17, 2013 tornado outbreak entered Washington from the southwest in East Peoria. Three people were killed, one during the storm and two others later from injuries, including a United States Army veteran. The tornado then destroyed the Georgetown Common apartment complex, including ripping second floors off most of the 16 apartment buildings. Hundreds of homes were destroyed as the tornado moved through town before finally exiting on the north side.

There were 4,189 households, out of which 35.3% had children under the age of 18 living with them, 63.8% were married couples living together, 7.7% had a female householder with no husband present, and 26.2% were non-families. 22.5% of all households were made up of individuals, and 8.5% had someone living alone who was 65 years of age or older. The average household size was 2.56 and the average family size was 3.02.

The Washington Chamber of Commerce lists the following information about employers:

All content from Kiddle encyclopedia articles (including the article images and facts) can be freely used under Attribution-ShareAlike license, unless stated otherwise. Cite this article:
Washington, Illinois Facts for Kids. Kiddle Encyclopedia.