Washington Park is a city square in Downtown Newark, New Jersey. It is the northernmost of the three downtown parks, along with Lincoln Park and Military Park, that were laid out in the colonial era. The triangular park is bounded by Broad Street, Washington Street, and Washington Place at the end of Halsey Street. It is home to several public statues and is surrounded by historic civic and commercial buildings. 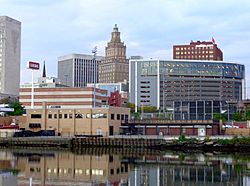 Originally known as the North Common or the Upper Green, the park is a contributing property to the James Street Commons Historic District and is surrounded by notable landmarks. It forms the northern end of the city's central business district.

The North Reformed Church was built in 1857-59 without the use of ore, iron, or steel. The Ballantine House, a National Historic Landmark, was built by the brewer of Ballantine beer, John Ballantine, in 1885. It is part of the Newark Museum. The main Newark Public Library was built in 1903. Residential brownstones are found along James Street.

Among the office buildings located in the district are the American Insurance Company Building, One Washington Park, IDT Corporation, 550 Broad Street, 33 Washington Street, and the Cablevision Call Center. Several facilities of Rutgers-Newark and the headquarters of Audible are on the park. 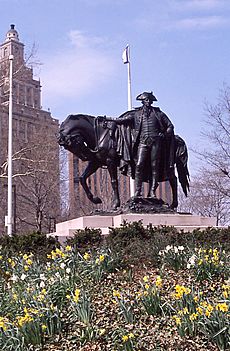 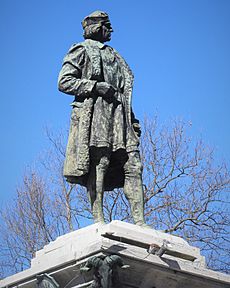 Several statues and tablets are in the park.

Since 2009 a weekly green market and outdoor concert is held at the park from June to October.

All content from Kiddle encyclopedia articles (including the article images and facts) can be freely used under Attribution-ShareAlike license, unless stated otherwise. Cite this article:
Washington Park (Newark) Facts for Kids. Kiddle Encyclopedia.