Watch Mr. Wizard is an American television program for children that demonstrates the science behind ordinary things. The show's creator and on-air host was Don Herbert. Marcel LaFollette says of the program, "It enjoyed consistent praise, awards, and high ratings throughout its history. At its peak, Watch Mr. Wizard drew audiences in the millions, but its impact was far wider. By 1956, it had prompted the establishment of more than five thousand Mr. Wizard science clubs, with an estimated membership greater than one hundred thousand."

It was briefly revived in 1971, and a third version of the show ran during the 1980s on the Nickelodeon children's cable television network as Mr. Wizard's World. 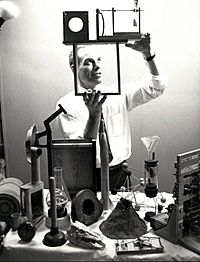 Watch Mr. Wizard first aired on NBC on March 3, 1951 with Don Herbert as the title character. In the weekly half-hour live television show, Herbert played a science hobbyist and every Saturday morning a neighbor boy or girl would come to visit. The children were played by child actors; one of them (Rita McLaughlin) enjoyed a long subsequent acting career. Mr. Wizard always had some kind of laboratory experiment going that taught something about science. The experiments, many of which seemed impossible at first glance, were usually simple enough to be re-created by viewers.

The show was very successful; by 1954 it was broadcast live by 14 stations, and by kinescope (a film made from the television monitor of the original live broadcast) by an additional 77. Mr. Wizard Science Clubs were started throughout North America, numbering 5,000 by 1955 and 50,000 by 1965. The show moved from Chicago to New York on September 5, 1955, and had produced 547 live broadcasts by the time the show was canceled in 1965, with the last telecast on June 27. The show was cited by the National Science Foundation and American Chemical Society for increasing interest in science and won a 1953 Peabody Award.

Thirty-two episodes of Watch Mr. Wizard were selected by Don Herbert and released on eight DVDs. They can be found at [1]

It was revived by NBC from September 11, 1971 through September 2, 1972 as Mr. Wizard, based on 26 shows produced in color in Ottawa, Ontario, Canada at the CJOH-TV studios. The series was legally considered Canadian content, despite the American origins of the series and its host. CBC Television carried these episodes within Canada.

Mr. Wizard's World, a faster-paced version of the show developed by Don Herbert, was shown three times a week on Nickelodeon, the then rising kids cable channel. Once again, the revival was produced in Canada (this time in Calgary). It produced 75 episodes from 1983 onwards, and continued to run thereafter as reruns. During its airing on Nickelodeon, it was the channel's #3 rated show in 1983 (behind Livewire and You Can't Do That on Television). It was also famous for its Ask Mr. Wizard segment where Mr. Wizard answered questions sent in by viewers of all ages. Episodes of it were reaired in 2005-2006 on the digital cable channel The Science Channel.

Herbert once said: "My time on this Earth is getting shorter and shorter each day, but no matter how old I get, and even when I am dead, Mr. Wizard's World will never die". It was cancelled in 1990, though reruns continued on Nick at Nite until 1995 and often in early morning time slots right after Nick at Nite finished (usually as part of Cable in the Classroom) until August 2000. In 1994, Herbert developed another new series of 15-minute spots called Teacher to Teacher with Mr. Wizard. They highlighted individual elementary science teachers and their projects. The series was sponsored by the National Science Foundation and was shown on Nickelodeon.

LaFollette applauds the unrivaled popularity and longevity of the original Mr. Wizard, but suggests that its sequels and other educational programs were often initiated in response to social criticism, then cancelled once such pressure diminished.

Selected episodes of Mr. Wizard's World are available on DVD from Mr. Wizard Studios Inc. in 10 single volumes featuring four episodes on each disk Gift box-sets are also available. Five seasons of the show, 75 episodes, of the 78 total were released on Amazon instant streaming. These episodes are also available through Vudu and can be streamed for free with ads or rented at a fee. ViacomCBS, the parent company of Nickelodeon, has also added the series to its Pluto TV service.

All content from Kiddle encyclopedia articles (including the article images and facts) can be freely used under Attribution-ShareAlike license, unless stated otherwise. Cite this article:
Watch Mr. Wizard Facts for Kids. Kiddle Encyclopedia.