Watford Museum is a local museum in Watford, Hertfordshire, in the United Kingdom. It is owned by Watford Borough Council and is located on the Lower High Street in Watford.

The museum opened in 1982 and is housed in a Grade II-listed Georgian town house which was previously the premises of Benskins Brewery. Its collection includes fine art, displays about local heritage, industry and sport, with a special collection related to the history of the Cassiobury Estate.

The mansion house at 194 Watford High Street was built for the Dyson family around 1775, although there are records of a brewery operating on the site since 1750. The three-storey, red-brick house, built in the Georgian neoclassical style, is fronted by a three-bay pediment with a central bull's eye window, and flanked by two lower wings which were added circa 1807. Tall, yellow-brick Victorian brewing premises once stood behind the house, although these have since been demolished.

The house was bought in 1867 by Joseph Benskin and continued to operate as a brewery until it was acquired by Ind Coope in 1957. The mansion house was later converted into offices, and it was listed grade II by English Heritage in 1952. It became the site of the Watford Museum in 1982 and was officially opened on 14 March 1982 by the Watford-born actor and comedian, Terry Scott.

The museum celebrated its 30th anniversary in 2011. 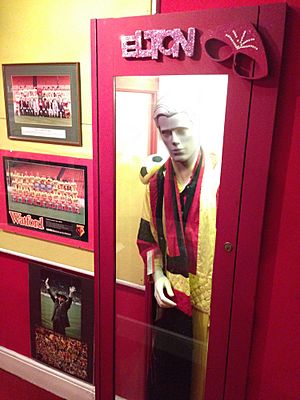 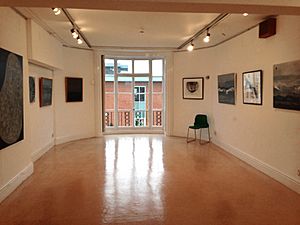 Among the other works of art on display are oil paintings of the Dutch and Flemish schools, with works by Adam François van der Meulen, Klaes Molenaer, Pieter Neeffs the Elder and Adriaen van Ostade, as well as paintings by Turner, Peter Lely, Ronald Pope and Joshua Reynolds. A number of acquisitions for the fine art collection have been assisted by grants from the Art Fund, including paintings by Henry Edridge, Sir Hubert von Herkomer, William Henry Hunt and John Wootton, and a set of 21 engravings from the Illustrations of the Book of Job by William Blake.

Displays in the museum document the development of Watford Junction railway station, and a small gallery dedicated to the history of Watford Football Club includes sports memorabilia and a stage costume worn by Elton John.

Around a third of the museum's collection is on display.

Watford Museum is located on the lower part of Watford High Street, around 160 metres (0.1 mi) south of the Harlequin Shopping Centre. The nearest railway station is Watford High Street London Overground station; after 2017 this will also become a London Underground Metropolitan line station. The museum is within easy reach of the A41, the M1 motorway, and National Cycle Route 6.

All content from Kiddle encyclopedia articles (including the article images and facts) can be freely used under Attribution-ShareAlike license, unless stated otherwise. Cite this article:
Watford Museum Facts for Kids. Kiddle Encyclopedia.