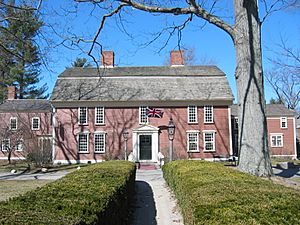 The Wayside Inn is an inn in Sudbury, Massachusetts, United States. It is the setting for Henry Wadsworth Longfellow's Tales of a Wayside Inn. The inn was founded in 1716 by David Howe. It was called Howe's Tavern. It is thought to be the oldest inn in the United States. Howe's granddaughter, Lydia Howe, was born in the inn. The inn is still open. It has a restaurant and guest rooms.

All content from Kiddle encyclopedia articles (including the article images and facts) can be freely used under Attribution-ShareAlike license, unless stated otherwise. Cite this article:
Wayside Inn Facts for Kids. Kiddle Encyclopedia.