Lake Webster is a fresh water lake located in Kosciusko County, Indiana, United States. Formerly it was known as Boydston Lake. It borders the town of North Webster to the west of the lake. 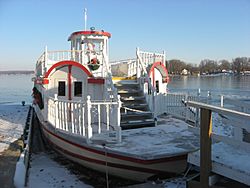 North Webster is home to Dixie, Indiana's oldest sternwheel paddleboat. Dixie has cruised Webster Lake since 1929, providing tours of the lake to generations of residents and visitors. A number of private owners cared for and operated the boat from 1929 until 2007 when title was transferred to a nonprofit organization called Dixie Sternwheeler Inc., which operates the boat for regular summer cruises from Memorial Day weekend through Labor Day and to allow chartered events such as weddings, retirement home outings, and company and community gatherings. Regular cruises last about 75 minutes and are each evening Monday through Saturday and during the afternoon and evening on Sunday. Many of the regular cruises feature period music and a narration with some history of the area, the lake, and Dixie.

Dixie was added to the National Register of Historic Places in 2009.

The Webster Lake dam was created at the southwestern point of the lake and a gristmill was built by an Ephriam Muirhead in 1837. This damming created one large lake from as many as seven smaller lakes. In 1842, Thomas Boydston purchased the gristmill. It is said that he is a descendant of Dr. Zabdiel Boylston. The mill served as a general store and post office in the 19th century. It burned in 1949 and replaced by the current dam.

All content from Kiddle encyclopedia articles (including the article images and facts) can be freely used under Attribution-ShareAlike license, unless stated otherwise. Cite this article:
Webster Lake (Indiana) Facts for Kids. Kiddle Encyclopedia.