Weedville, Arizona was a small community founded in 1911, in an area which at the time was outside the city limits of Peoria. The area is located within the pockets of unincorporated land under the jurisdiction of Maricopa County. All of the census and demographic data for the residents of Weedville are part of the information reported for the City of Peoria since Weedville is located within the limits of that city.

Reverend Ora Rush Weed (1868–1942) was a Methodist minister from Kansas. It is unknown why Weed decided to leave his hometown and with his wife Phoebe and family. They moved and settled in Arizona. Some of the members of his Kansas ministry followed him and together they homesteaded the area north of Thunderbird Road and 75th Ave, outside of what at the time were the city limits of Peoria.

By 1916, Weed established the Path Church (now known as the "Old Path Church") and a boarding school. The name "Paths"comes from a Bible verse:

"Stand ye in the ways, and see, and ask for the old paths, where is the good way, and walk therein, and ye shall find rest for your souls."

A small religious community flourished around the development of Weedville, which Weed named after himself. By 1921, the community established a cemetery which was named the Old Paths Cemetery.

Besides running a small general store, Weed ran a farm which produced broomcorn. He then established a broom factory using the broom grass and stalks of the broomcorn. He employed many ex-convicts who had gained experience as broom makers in prison. As such the factory helped support the small community economically. 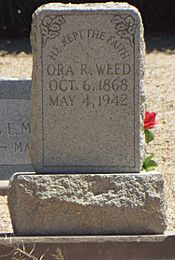 Weedville is located in the area within 71st. and 75th Aves. between Thunderbird Blvd. and Acoma Drive. The latitude is 33.614 and the longitude −112.215. The elevation of Weedville is 1,197 feet above mean sea level.

Phoenix Sky Harbor International Airport is the nearest major commercial airport to Weedville, with a large number of domestic and limited international service. Mesa Gateway Airport is another alternative nearby, albeit one with comparatively limited commercial airline service.

All content from Kiddle encyclopedia articles (including the article images and facts) can be freely used under Attribution-ShareAlike license, unless stated otherwise. Cite this article:
Weedville, Arizona Facts for Kids. Kiddle Encyclopedia.