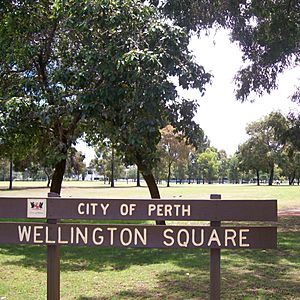 Wellington Square is a public park located on Wellington Street in the suburb of East Perth in Perth, Western Australia.

The park was originally a swamp and was drained in the 1830s. It was originally used to exercise horses. The ground was known as the Recreation Ground or the "Rec".

In 1898 the ground was cleared to form a series of cricket fields, and named in honour of the Duke of Wellington, Prime Minister of the United Kingdom at the time of the settlement of the Swan River Colony. Prior to the construction of the WACA Ground in the 1890s, the park served as the main cricket ground in Perth.

In 2020 the City of Perth began a $18.7 million upgrade of Wellington Square. Redevelopment will include construction of a new playground, basketball courts, new paths and facilities and a place of reflection to commemorate the Stolen Generation.

The square is used as a meeting place, and occasionally for cricket and athletics by local schools and clubs. It is also used as a live music venue.

All content from Kiddle encyclopedia articles (including the article images and facts) can be freely used under Attribution-ShareAlike license, unless stated otherwise. Cite this article:
Wellington Square, Perth Facts for Kids. Kiddle Encyclopedia.