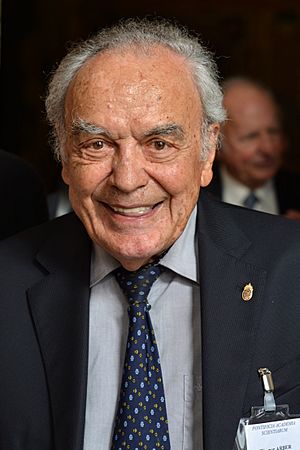 Werner Arber (born 3 June 1929) is a Swiss microbiologist and geneticist. He won the Nobel Prize in Physiology or Medicine in 1978 for his discovery of restriction endonucleases which he shared with Daniel Nathans and Hamilton O. Smith.

Arber as one of 20 Nobel Laureates who signed the Stockholm memorandum at the 3rd Nobel Laureate Symposium on Global Sustainability in Stockholm, Sweden on 18 May 2011.

All content from Kiddle encyclopedia articles (including the article images and facts) can be freely used under Attribution-ShareAlike license, unless stated otherwise. Cite this article:
Werner Arber Facts for Kids. Kiddle Encyclopedia.