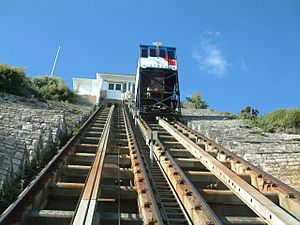 The line viewed from below. 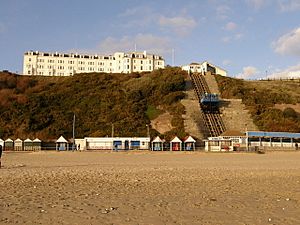 The line and beach. In December the beach is deserted and the line closed for the winter.

The West Cliff Railway, or West Cliff Lift, is a funicular railway located on West Cliff in the English seaside resort of Bournemouth. The line serves to link the seaside promenade and beach with the cliff top and the town behind.

The line is owned and operated by Bournemouth, Christchurch and Poole Council and has the following technical parameters:

The winding motor was replaced in the 1960s by a 28 horsepower (21 kW) three-phase motor. The cars were also replaced in the 1960s by aluminium-bodied cars intended to be interchangeable across all three of Bournemouth's surviving cliff railways. In 1987 the track was re-laid, and during the 1990s the line was further upgraded with the installation of an electronic control system.

All content from Kiddle encyclopedia articles (including the article images and facts) can be freely used under Attribution-ShareAlike license, unless stated otherwise. Cite this article:
West Cliff Railway Facts for Kids. Kiddle Encyclopedia.