The West Granby Historic District is a historic district in Granby, Connecticut. It encompasses the historic village of West Granby, which extends along Simsbury Road between Firetown Road and Hartland Road. Although this area was settled in the 18th century, and has a few surviving buildings from that time, its most significant period of development was in the 19th century, when industry came to play a role in the area. Most of the district's 113 buildings primary buildings are residential, although there are many agricultural outbuildings and garages. The houses are typically in simple vernacular interpretations of architectural styles popular during their construction, and represent a cross section of 19th-century and early 20th-century architecture.

The district was listed on the National Register of Historic Places (NRHP) in 1992. 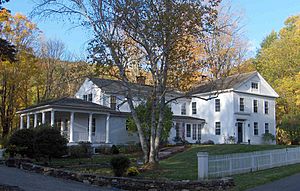 All content from Kiddle encyclopedia articles (including the article images and facts) can be freely used under Attribution-ShareAlike license, unless stated otherwise. Cite this article:
West Granby Historic District Facts for Kids. Kiddle Encyclopedia.