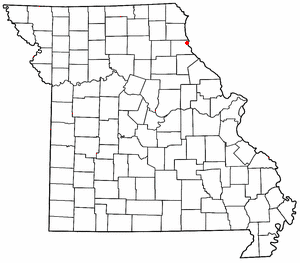 West Quincy is a small commercial area in northeastern Marion County, Missouri, United States, on U.S. Route 24. It has no permanent residents.

West Quincy was platted in 1874, and named for its location west of Quincy, Illinois. It is the location of the Lock and Dam No. 21 Historic District, listed on the National Register of Historic Places in 2004.

West Quincy is directly across the Mississippi River from Quincy, Illinois and once housed a Chicago, Burlington & Quincy train station, drive-in theater, and corporation. However, since the Great Flood of 1993, many businesses have left.

During the flood of 1993, the levee was sabotaged and water filled the floodplain, and a nearby barge was sucked into the break in the levee. It hit a local gas station and caused an explosion. Oil caught fire and the fire snaked across the water before it extinguished itself. All of the Quincy bridges—the only links across the river from Missouri to Illinois for 200 miles—were closed. One bridge, the Bayview Bridge, was closed for 71 days. This forced residents to drive to St. Louis or Burlington, Iowa, fly or take a ferry to get across the river.

A man from the Illinois side of the river, James Scott, was convicted of causing the flood and was sentenced to life in prison.

Today, West Quincy is home to a number of gas stations that largely service consumers from Quincy. Missouri's lower state taxes on gasoline and cigarettes are the primary draw, as are the seasonal fireworks tents that spring up in the area during the summer. A number of other small businesses, including a pawn shop, a bank, and a number of car dealerships also operate in West Quincy.

All content from Kiddle encyclopedia articles (including the article images and facts) can be freely used under Attribution-ShareAlike license, unless stated otherwise. Cite this article:
West Quincy, Missouri Facts for Kids. Kiddle Encyclopedia.