It is part of a group of Australian marine parks managed by the Department of the Environment and Energy known as the South-west Marine Parks Network. It adjoins the Western Kangaroo Island Marine Park managed by the Government of South Australia which it both bounds on its north-west side and fully encloses the portion of the state marine park surrounding Lipson Reef near its eastern extent.

The marine park includes ecosystems representative of the bioregion known as the "Spencer Gulf Shelf Province", two "key ecological features" consisting of firstly of a feature known as the "Kangaroo Island Pool" and the associated "Eyre Peninsula upwelling" both notable for their "high productivity, breeding and feeding aggregations" and secondly of a feature described as "Ancient coastline" within a depth range of 90–120 metres (300–390 ft) and as being of "high productivity", a calving area for southern right whale and feeding areas for the following species - Australian sea lion, blue whale, Caspian tern, great white shark, short-tailed shearwater and sperm whale. 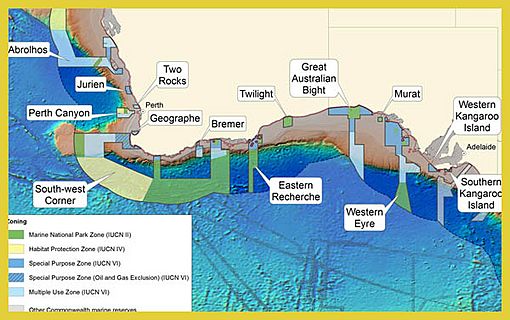 All content from Kiddle encyclopedia articles (including the article images and facts) can be freely used under Attribution-ShareAlike license, unless stated otherwise. Cite this article:
Western Kangaroo Island Marine Park Facts for Kids. Kiddle Encyclopedia.