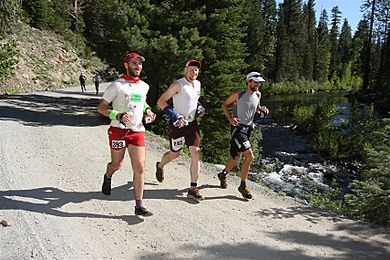 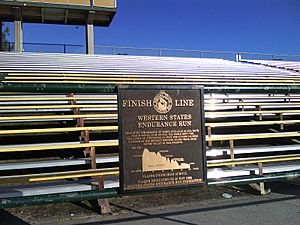 The Western States Endurance Run, known commonly as the Western States 100, is a 100-mile (161 km) ultramarathon that takes place on California's Sierra Nevada Mountains trails each year on the last full weekend of June. The race starts at the base of the Squaw Valley ski resort and finishes at the Placer High School track in Auburn, California. The terrain is quite rugged, frequently showcasing snow on the highest passes and record hot temperatures throughout the course. Runners ascend a cumulative total of 18,090 feet (5500 m) and descend a total of 22,970 feet (7000 m) on mountain trails before reaching the finish. Because of the length, the race commences at 5 a.m. and continues through the day and into the night. Runners finishing before the 30-hour time limit for the race receive a commemorative bronze belt buckle, while runners finishing in under 24 hours receive a silver belt buckle.

Sixteen runners signed up for the first official Western States Endurance Run in 1977, and started along with the horses in the Tevis Cup. Thirteen of the 16 had dropped out or were pulled by the midpoint that year. Of the three remaining runners, only Andy Gonzales finished in the 24-hour time limit set for the horses. The other two, Peter Mattei and Ralph Paffenbarger, finished in 28 hours and 36 minutes (unofficially), leading to the establishment of the 30-hour bronze buckle time limit for runners. The Run organization later became its own entity: The Western States Endurance Run Foundation.

The following year, 1978, 63 runners competed and 30 runners finished the first Western States Endurance Run. The race was held on a separate date, independent of the Tevis Cup Trail Ride.

As the event grew in notoriety, a lottery system was created in 1981 to allocate the available positions. A limited number of entries will be reserved to the top two men and the top two women finishers of the five Altra Golden Ticket Series races and the top-ten finishers of the preceding Western States race. After the few select entries are awarded, a lottery is then held to fill the field from a pool of qualified applicants. In 2017, a wait list was implemented with replacement runners selected from the wait list to ensure that the 369 allowable starting spots are completely filled.

In 1984, the Granite Chief Wilderness was created under the provisions of the 1964 Wilderness Act, and about four miles (6 km) of the trail were within the new boundaries. The wilderness designation would normally mean that the Forest Service would not be able to allow organized events in the area. In 1988, however, the Endurance Run (and the original Trail Ride) was finally given Congressional permission to continue, but with the number of runners limited to 369, the size of the 1984 field.

Tim Twietmeyer, an ultra-marathoner from California completed the race a record 25 times, all in under 24 hours, and winning the race five times.

In 2008 the race was canceled due to bad air quality and smoke from an unprecedented number of wildfires.

The 2009 winners of the race were Hal Koerner and Anita Ortiz. In 2010, Geoff Roes overtook Anton Krupicka at the Brown's Bar checkpoint with 10.1 miles to go to win the race and set a new course record with 15:07:04. Tracy Garneau won the women's race in 19:01:55. Amy Palmiero-Winters, a transtibial amputee, became the first amputee in history to complete the race, in 27:43:10.

In 2016, Andrew Miller, 20, became the youngest male winner of the Western States 100 after newcomer Jim Walmsley, the forecasted winner, took a wrong turn approaching the north fork of the American River near mile 95.

For the 2018 year, Jim Walmsley broke the course record and ended a streak of failed attempts with a 14:30:04 finish. Jim was reportedly delayed by a few minutes at 95 miles by a mother bear and cubs on the trail.

All content from Kiddle encyclopedia articles (including the article images and facts) can be freely used under Attribution-ShareAlike license, unless stated otherwise. Cite this article:
Western States Endurance Run Facts for Kids. Kiddle Encyclopedia.