Westport is a coastal town of colonial origin located along Long Island Sound in Fairfield County, Connecticut, 47 miles (76 km) northeast of New York City in the United States. The town had a population of 26,391 according to the 2010 U.S. Census and in 2008 ranked the tenth wealthiest town in the U.S. with populations between 20,000 and 65,000, and second in the state. 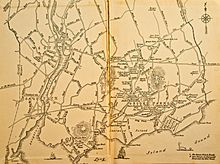 The earliest known inhabitants of the Westport area as identified through archaeological finds date back 7,500 years. Records from the first white settlers report the Pequot Indians living in the area which they called Machamux translated by the colonialists as beautiful land. Settlement by colonialists dates back to the five Bankside Farmers; whose families grew and prospered into a community that continued expanding. The community had its own ecclesiastical society, supported by independent civil and religious elements, enabling it to be independent from the Town of Fairfield. The settlers arrived in 1693, having followed cattle to the isolated area known to the Pequot as the "beautiful land". As the settlement expanded its name changed: it was briefly known as "Bankside" in 1693, officially named Green's Farm in 1732 in honor of Bankside Farmer John Green and in 1835 incorporated as the Town of Westport.

During the revolutionary war—on April 25, 1777, a 1,850 strong British force under the command of the Royal Governor of the Province of New York, Major General William Tryon landed on Compo Beach to destroy the Continental Army’s military supplies in Danbury. Minutemen from Westport and the surrounding areas crouched hiding whilst Tryon's troops passed and then launched an offensive from their rear. A statue on Compo beach commemorates this plan of attack with a crouching Minuteman facing away from the beach; looking onto what would have been the rear of the troops.

The Town of Westport was officially incorporated on May 28, 1835, with lands from Fairfield, Weston and Norwalk. Daniel Nash led 130 people of Westport in the petitioning of the Town of Fairfield for Westport’s incorporation. The driving force behind the petition was to assist their seaport’s economic viability that was being undermined by neighboring towns’ seaports. For several decades after that, Westport was a prosperous agricultural community distinguishing itself as the leading onion-growing center in the U.S. Blight caused the collapse of Westport's onion industry leading to the mills and factories replacing agricultural as the town's economic engine.

Agriculture was Westport’s first major industry. By the 19th century, Westport had become a shipping center in part to transport onions to market.

Starting around 1910 the town experienced a cultural expansion. During this period artists, musicians, and authors such as F. Scott Fitzgerald moved to Westport to be free from the commuting demands experienced by business people. The roots of Westport’s reputation as an arts center can be traced back to this period during which it was known as a "creative heaven."

In the 20th century a combination of industrialization, and popularity among New Yorkers attracted to fashionable Westport—which had attracted many artists and writers—resulted in farmers selling off their land. Westport changed from a community of farmers to a suburban development.

In the 1950s through to the 1970s, New Yorkers relocating from the city to the suburbs discovered Westport's culture of artists, musicians and authors. The population grew rapidly, assisted by the ease of commuting to New York City and back again to rolling hills and the "natural beauty of the town." By this time Westport had "chic New York-type fashion shopping" and a school system with a good reputation, both factors contributing to the growth.

By the 21st century, Westport had developed into a center for finance and insurance (23%), and professional, scientific and technical services (21%).

Both the train station and a total of 26 percent of town residents live within the 100-year floodplain. 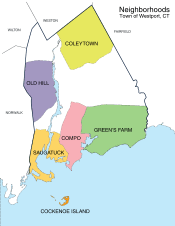 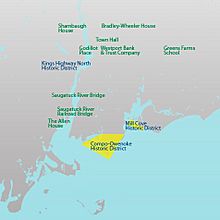 Map of National Register of Historic Places in Westport

This is a list of structures on the National Register of Historic Places in Westport:

Comprising 234 acres (0.95 km2), Sherwood Island State Park is located on Long Island Sound and includes beach access. Compo Beach and Burying Hill Beach are municipal beaches that are open to out-of-town visitors in the summer for a fee. The state's 9/11 memorial was put in Sherwood Island State Park in Westport; on a clear day the New York City skyline can be seen.

In 2011, Paul Newman's estate gave land to Westport to be managed by the Aspetuck Land Trust.

In 2010, the historic Wakeman Farm was reopened to the public as the Wakeman Town Farm and Sustainability Center. The town's website describes as a "organic demonstration homestead open to the public. The Farm is a model facility created to educate the community with local healthy food production, responsible land stewardship, sustainable practices and community service orientation."

Interstate 95, the Merritt Parkway, and U.S. 1, as well as the Saugatuck River, run through Westport.

Westport has two train stations, Green's Farms and Westport on the Metro-North Railroad's New Haven Line, which serves Stamford and Grand Central Terminal in New York City or New Haven-Union Station. This line is shared with Amtrak trains as it is part of the Northeast Corridor, but no Amtrak services stop at Green's Farms or Westport. The nearest Amtrak stations are at Bridgeport (10 miles) and Stamford (12 miles).

Literature and film – Westport has been the subject, inspiration, or location for written and cinematic works:

·Believed to be the setting of F. Scott Fitzgerald's "The Great Gatsby" as he lived in Westport at the time of writing. East Egg and West Egg are believed to be represented by the signs "Easton" and "Weston" on the two sides of Westport.

All content from Kiddle encyclopedia articles (including the article images and facts) can be freely used under Attribution-ShareAlike license, unless stated otherwise. Cite this article:
Westport, Connecticut Facts for Kids. Kiddle Encyclopedia.