Wheatlands, named after its large annual wheat crop, was established as a family farm by Revolutionary War veteran Timothy Chandler in 1791. Chandler's son, John Chandler (1786–1875), inherited Wheatlands in 1819, and under his direction the plantation grew to become one of Sevier County's largest farms, covering 3,700 acres (1,500 ha) by 1850. Chandler's freed slaves inherited part of Wheatlands in 1875, and formed the Chandler Gap community in the hills south of the plantation.

Wheatlands is located at the corner of State Highway 338 (Boyds Creek Highway, sometimes called Old Knoxville Highway) and Cedar Springs Valley Road in the Boyd's Creek community, about halfway between Sevierville and Seymour. The plantation was situated along the banks of Boyd's Creek, which empties into the French Broad River at the Brabson's Ferry Plantation about a mile to the east. This gave Wheatlands access to the nation's interior waterways, allowing this shipment of its "Wheat Whiskey" to New Orleans.

View of the west end of the house, showing the rear kitchen/dining room wing

State Highway 338 roughly follows what was once a section of the 18th-century Native American trail known as the Great Indian Warpath. In 1780, John Sevier followed the path across the French Broad River to engage and defeat a Cherokee force at the Battle of Boyd's Creek, which took place at the future site of Wheatlands. Early settlers also followed the trail into the Boyd's Creek area, among them Timothy Chandler, a Revolutionary War veteran from Virginia, who moved his family to Boyd's Creek in 1791.

After Timothy Chandler died in 1819, his son, John Chandler, inherited the family's Boyd's Creek farm. The original Chandler farmhouse burned in 1823, and John Chandler built the present plantation house at the site to replace it. By 1850, Wheatlands had become one of the largest farms in Sevier County, covering some 4,600 acres (1,900 ha) worth $7,000 (US$179 thousand in present terms2018), and included fifteen horses, ten mules, forty cattle, fifty sheep, and three hundred hogs. Chandler and fourteen slaves produced 3,000 bushels of corn, 400 bushels of oats, 200 bushels of sweet potatoes, 12 bushels of buckwheat, 10 tons of hay, 150 pounds of wool, 200 pounds of butter, and 200 gallons of honey. The plantation's distillery produced 6,000 gallons of whiskey, worth $4,500.(US$115 thousand in present terms2018).

Wheatlands was used as Winter Quarters for the Union by Tenth Regiment Cavalry out of Michigan and the 8th division from Western Pennsylvania. They ran raids into Sevierville, Gatlinburg and Newport. They sent troops to the Brabson Plantation and took over their Ferry and occupied Bartley Chandler's home in Sevierville as a prison. Two cannons were sent to "Battle of Fair Garden" and shot over the Rose Glen Plantation.

When Southern slaves were emancipated during the American Civil War (1861–1865), Chandler started paying his freed slaves to remain at Wheatlands. Upon his death in 1875, Chandler left his former slaves a portion of land along the south side of Wheatlands known as Chandler Gap. The Chandler Gap community remained a predominantly African-American community well into the 20th century.

In 2011, three Pigeon Forge businessmen purchased Wheatlands, and announced plans to restore the house, and possibly re-establish a distillery on the property. 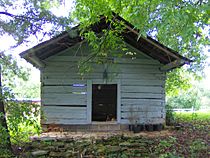 Original structures at Wheatlands include the mansion house (rebuilt around 1825 after a fire), a smokehouse, the summer kitchen with dining hall, and loom house. A second storage shed and barn have been added more recently. The distillery burned in the late 1930s. The original house, made of clapboard with a large front porch, burned in 1824, and was rebuilt in 1825. Wheatlands is a 2-story, 5-bay brick house with a 1.5-story kitchen and dining room wing attached to the rear to form an "L" shape. The house is designed in the Federal style, although a Queen Anne-style front porch was added as well as Queen Anne Windows in 1889. The brickwork on the house's front facade uses a Flemish bond, and the brickwork on the sides and rear uses common bond. A brick cornice encircles the house.

The interior of the house retains most of its original design elements, which include hand-planed railings and windows. The mantel designs were based on Adamesque models in patternbooks, and include hand-carved details and entablatures. The house is based on a central floor plan, rather than a parlor hall floor plan which was more typical of the period.

A frame storage shed built sometime around 1825 still stands a few feet behind the house. The shed, which has beaded weatherboarding, may have once housed a distillery, an ice house, or a loom house. The smokehouse at Wheatlands dates to the first half of the 19th century, and is constructed of hewn logs with a board and batten door.

All content from Kiddle encyclopedia articles (including the article images and facts) can be freely used under Attribution-ShareAlike license, unless stated otherwise. Cite this article:
Wheatlands (Sevierville, Tennessee) Facts for Kids. Kiddle Encyclopedia.