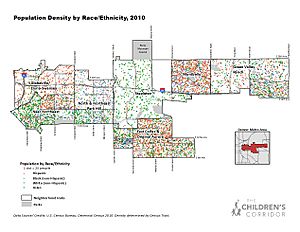 Whittier is a neighborhood of Denver, Colorado, located approximately 2 miles northeast of downtown Denver. The boundaries of the neighborhood are 23rd Avenue to the south, Martin Luther King Boulevard (32nd) to the north, Downing St. to the west and York St. to the east. The neighborhood is mostly residential and old (1890s) by standards of the cities of the American West. Most of the housing stock was built prior to the 1940s.

The neighborhood is named for a school formerly located at 24th Avenue and Downing St. which was named after John Greenleaf Whittier (1807-1892), an abolitionist poet and a founding member of the American Republican political party. Given the philosophy of Whittier, the neighborhood was ethnically integrated from its inception.

Today, the Whittier neighborhood is ethnically diverse with Blacks, Hispanics, and Whites composing the population. A combination of proximity to downtown, parks and a public golf course in addition to a housing stock of early twentieth century homes of craftsman architecture at reasonable prices is driving an influx of young professionals and their families to the Whittier neighborhood.

All content from Kiddle encyclopedia articles (including the article images and facts) can be freely used under Attribution-ShareAlike license, unless stated otherwise. Cite this article:
Whittier, Denver Facts for Kids. Kiddle Encyclopedia.