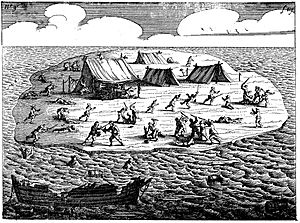 Following the Batavia shipwreck in 1629, a group of the marooned soldiers under the command of Wiebbe Hayes were put ashore on West Wallabi Island to search for water. A group of mutineers who took control of the other survivors left Hayes' group there secretly hoping that they would starve or die of thirst. However the soldiers discovered that they were able to wade to East Wallabi Island, where there was a fresh water spring. Furthermore, West and East Wallabi Island are the only islands in the group upon which the tammar wallaby lives. Thus the soldiers had access to sources of both food and water that were unavailable to the mutineers.

Later the mutineers mounted a series of attacks, which the soldiers repulsed. The remnants of improvised defensive walls and stone shelters built by Wiebbe Hayes and his men on West Wallabi Island are Australia's oldest known European structures, more than a century and a half before expeditions to the Australian continent by James Cook and Arthur Phillip. The remnants of "the fort ... [are] nothing more than a tiny, sandstone-coloured rectangle in the scrub about 100 metres [110 yd] from the sea. It is unimpressive and isolated and yet this simple structure, just some loose rocks piled up to make a simple fortress, is the first building Europeans constructed in Australia."

All content from Kiddle encyclopedia articles (including the article images and facts) can be freely used under Attribution-ShareAlike license, unless stated otherwise. Cite this article:
Wiebbe Hayes Stone Fort Facts for Kids. Kiddle Encyclopedia.