Wigmore Abbey Parish is a parish with nine village churches in northwest Herefordshire. 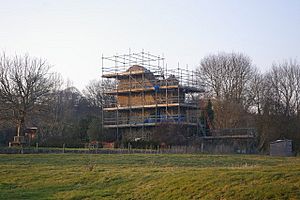 Wigmore Abbey was an Augustinian abbey with a grange, from 1179 to 1530, situated about a mile (2 km) north of the village of Wigmore, Herefordshire, England: grid reference SO 410713. Only ruins of the abbey now remain and on Historic England's Heritage at Risk Register their condition is listed as 'very bad'.

History of the abbey

The founding of the abbey was contemplated by Ranulph de Mortimer in the reign of Henry I, but only brought to fruition by his son, Hugh de Mortimer, who had the abbey consecrated at Wigmore in 1179 in the parish of Leintwardine by Robert Foliot, the Bishop of Hereford. The construction of the abbey was also assisted by other local landowners, especially Brian de Brampton and his John, who contributed building materials from their woods and quarries. The abbey community had been some thirty years in moving through various sites in northern Herefordshire before this final consecration. In this it was one of the most moved foundations in the country, having been settled during these years occasionally at Shobdon, Llanthony Priory and Lye or Eye as it has been written.

At the time it has been suggested that this was the largest monastery in the county, followed by Abbey Dore and Leominster Priory.

The abbey church, like the church at Wigmore, was dedicated to St James. As they were the principal patrons of the abbey, many members of the Mortimer family were buried there, among them five Earls of March.

The abbey continued to flourish until the period of the Dissolution of the Monasteries in 1530, when it was destroyed. The remains of the building were given to Sir T. Palmer.

Wigmore Abbey is thought to be the place of origin of a manuscript outlining its own history and founding, as well as the lineage of Roger Mortimer, whose father Edmund petitioned Parliament (successfully) to be named heir to the throne in 1374. His claim was superseded by King Henry IV's accession to the throne. The manuscript concerning the Mortimers and the foundation of Wigmore Abbey is now housed at the University of Chicago. Another chronicle has been lost, but copies of the beginning and the end of this have survived in Manchester and Dublin.

Recent history of the remains

The land encompassing the abbey remains was owned by the Powell family, and later by the Brierley family, before the ruins themselves were sold to British actor John Challis (best known as Boycie from Only Fools and Horses), while the fields and remaining buildings were bought by farmers.

As of 2002, the ruins of the abbey were the property of John Challis, who lived in the abbot's lodging, the only building to survive. The TV programme The Green Green Grass starring John Challis was filmed at Wigmore Abbey along with other locations in the area.

All content from Kiddle encyclopedia articles (including the article images and facts) can be freely used under Attribution-ShareAlike license, unless stated otherwise. Cite this article:
Wigmore Abbey Facts for Kids. Kiddle Encyclopedia.