Wildlife Victoria is the preeminent wildlife rescue service in the state of Victoria, Australia. Established in 1989, it is a non-profit, volunteer based charity that provides an emergency phone service to the community by responding to calls regarding sick, injured and orphaned wildlife.

When the emergency phone service receives a call, Wildlife Victoria uses a comprehensive database to locate the closest available and suitable experienced volunteer, who then locates the animal and determines the appropriate course of action.

The organization reports that its emergency phone service receives up to 300 calls per day and around 60,000 calls per year. In the eighteen months to May 2013, around 80,000 emergency phone calls were received. A diverse range of animals is provided with emergency assistance, including kangaroos, possums, cockatoos, koalas, bats, blue tongued lizards, ducks and fur seals. 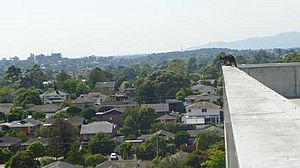 Wildlife Victoria responds to a displaced wallaby in Doncaster

Wildlife Victoria is often actively involved in educating the public on several issues, including responsible pet ownership, as a large number of their emergency cases are caused by cat and dog attacks, the dangers of fruit tree netting, development encroaching on natural habitat, the impact of environmental degradation and animal cruelty.

The work of Wildlife Victoria was highlighted during the 2009 Black Saturday Bush fires that claimed 173 human lives with estimates of millions of animal lives lost. The organization coordinated rescue teams across the state to search and save wildlife injured during the fires.

All content from Kiddle encyclopedia articles (including the article images and facts) can be freely used under Attribution-ShareAlike license, unless stated otherwise. Cite this article:
Wildlife Victoria Facts for Kids. Kiddle Encyclopedia.