Williamston is a town in Anderson County, South Carolina, United States, The population was 3,934 at the 2010 census.

There were 1,590 households out of which 27.6% had children under the age of 18 living with them, 49.9% were married couples living together, 14.0% had a female householder with no husband present, and 31.4% were non-families. 28.8% of all households were made up of individuals and 14.7% had someone living alone who was 65 years of age or older. The average household size was 2.38 and the average family size was 2.91. 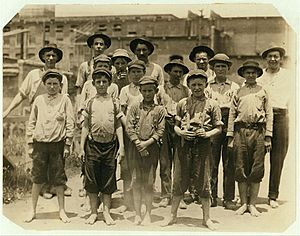 Child labor at the Williamston Mill, 1912. Photo by Lewis Hine.

The founding of Williamston was a dream come true for West Allen Williams. One day in 1842 this farmer stopped for a nap while riding over his property. He dreamed of a clear spring with healing qualities and envisioned pale and feeble people improving miraculously. Upon awakening, he followed a trickling sound and discovered the source of the Williamston mineral spring.

As news of the medicinal water spread, the town grew and became a major resort when the railroads arrived in 1851. Soon it became known as the "Saratoga of the South", which was a referral to a similar spring in New York. To accommodate the influx, the Mammoth Hotel was built near the spring and was the largest building in the state at that time, featuring 150 rooms plus bowling alleys and ballrooms. Unfortunately, a devastating fire in 1860 destroyed it and other buildings. The town was initially known as Mineral Springs, but this was changed to Williamston in 1852. Mr. Williams set aside property to preserve the spring and to begin schools and churches.

The Civil War brought an end to that "golden era", but not without leaving its own history. The last skirmish east of the Mississippi took place a few miles north of town when cadets from the Arsenal Academy of Columbia encountered Stoneman's Raiders on May 1, 1865.

In 1871, Dr. Samuel Lander established a girls' school which eventually moved to the city of Greenwood and became Lander University. Dr. Lander was instrumental in prohibiting the sale of liquor in town, a feeling which exists today in this community served by more than 70 churches.

Around the turn of the century the cotton mills settled near the river and played major roles in shaping the communities. Many families still treasure memories of events sponsored by the mills and of teams playing in the old textile leagues. Shoeless Joe Jackson took his first steps on Pelzer's mill hill and went on to become the greatest natural baseball player ever.

Railroads continued to serve the area until the 1950s. The P & N was designed to operate through the heart of the Piedmont textile industry and is remembered by its motto "A Mill to the Mile" and by its rate of a penny a mile. With today's dominance of auto transportation, Williamston has highways 8, 20, and 29 connecting it to upstate corridors including nearby Interstate 85.

All content from Kiddle encyclopedia articles (including the article images and facts) can be freely used under Attribution-ShareAlike license, unless stated otherwise. Cite this article:
Williamston, South Carolina Facts for Kids. Kiddle Encyclopedia.