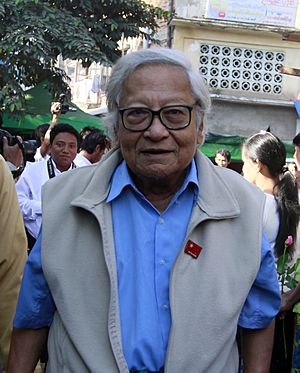 Win Tin (Burmese: ဝင်းတင်, [wɪ́ɴ tɪ̀ɴ]; 12 March 1930 – 21 April 2014) was a Burmese politician and political prisoner. He was arrested in July 1989 because of his senior position in the National League for Democracy (NLD). For his writings, he spent 19 years in prison. He was born Kyopinkauk, Pegu Division, British Burma.

All content from Kiddle encyclopedia articles (including the article images and facts) can be freely used under Attribution-ShareAlike license, unless stated otherwise. Cite this article:
Win Tin Facts for Kids. Kiddle Encyclopedia.