Kids Encyclopedia Facts
Not to be confused with Windows 10.

Windows 1.0 is a graphical personal computer operating environment developed by Microsoft. Microsoft had worked with Apple Computer to develop applications for Apple's January 1984 original Macintosh, the first mass-produced personal computer with a graphical user interface (GUI) that enabled users to see user friendly icons on screen. Windows 1.0 was released on November 20, 1985, as the first version of the Microsoft Windows line. It runs as a graphical, 16-bit multi-tasking shell on top of an existing MS-DOS installation. It provides an environment which can run graphical programs designed for Windows, as well as existing MS-DOS software. Its development was spearheaded by the company founder Bill Gates after he saw a demonstration of a similar software suite known as Visi On at COMDEX.

Despite positive responses to its early presentations and support from a number of hardware and software makers, Windows 1.0 was received poorly by critics. Critics felt Windows 1.0 did not meet their expectations. In particular, they felt that Windows 1.0 put too much emphasis on mouse input at a time when mouse use was not yet widespread; not providing enough resources for new users; and for performance issues, especially on systems with lower computer hardware specifications. Despite these criticisms, Windows 1.0 was an important milestone for Microsoft, as it introduced the Microsoft Windows line. Windows 1.0 was declared obsolete and Microsoft stopped providing support and updates for the system on December 31, 2001. 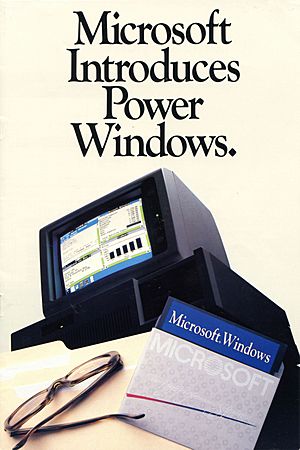 Microsoft began developing a graphical user interface (GUI) in 1981. The development of Windows began after Microsoft founder Bill Gates saw a demonstration at COMDEX 1982 of VisiCorp's Visi On, a GUI software suite for IBM PC compatible computers. In 1983 Microsoft learned that Apple's own GUI software—based in part on Xerox PARC technology–was much more sophisticated, and decided that its own product would be different.

Microsoft first presented Windows to the public on November 10, 1983. Requiring two floppy disk drives and 192 KB of RAM, Microsoft described the software as a device driver for MS-DOS 2.0. By supporting cooperative multitasking in tiled windows when using well-behaved applications that only used DOS system calls, and permitting non-well-behaved applications to run in a full screen, Windows differed from both Visi On and Apple Computer's Lisa by immediately offering many applications. Unlike Visi On, Windows developers did not need to use Unix to develop IBM PC applications; Microsoft planned to encourage other companies, including competitors, to develop programs for Windows by not requiring a Microsoft user interface in their applications.

Many manufacturers of MS-DOS computers such as Compaq, Zenith, and DEC promised to provide support, as did software companies such as Ashton-Tate and Lotus. After previewing Windows, BYTE magazine stated in December 1983 that it "seems to offer remarkable openness, reconfigurability, and transportability as well as modest hardware requirements and pricing … Barring a surprise product introduction from another company, Microsoft Windows will be the first large-scale test of the desktop metaphor in the hands of its intended users".

From early in Windows' history Gates viewed it as Microsoft's future. He told InfoWorld magazine in April 1984 that "Our strategies and energies as a company are totally committed to Windows, in the same way that we're committed to operating-system kernels like MS-DOS and Xenix. We're also saying that only applications that take advantage of Windows will be competitive in the long run." IBM was notably absent from Microsoft's announcement, and by late 1984, the press reported a "War of the Windows" between Windows, IBM's TopView, and Digital Research's Graphics Environment Manager (GEM). Microsoft had promised in November 1983 to ship Windows by April 1984, but subsequently denied that it had announced a release date, and predicted that Windows would ship by June 1985. Deemphasizing multitasking, the company stated that Windows' purpose, unlike that of TopView, was to "turn the computer into a graphics-rich environment" while using less memory. After Microsoft persuaded IBM that the latter needed a GUI, in April 1987 the two companies announced the introduction of OS/2 and its graphical OS/2 Presentation Manager, which were supposed to ultimately replace both MS-DOS and Windows. In November 1987, Windows 1.0 was succeeded by Windows 2.0. Microsoft supported Windows 1.0 for 16 years, until December 31, 2001 – the longest out of all versions of Windows. 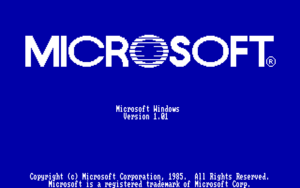 Version 1.03, released in August 1986, included enhancements that made it consistent with the international release like drivers for European keyboards and additional screen and printer drivers. 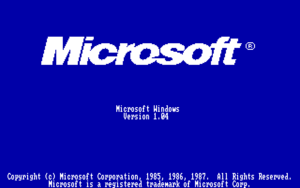 Version 1.04, released in April 1987, added support for the new IBM PS/2 computers, although no support for PS/2 mice or new VGA graphics modes was provided.

All content from Kiddle encyclopedia articles (including the article images and facts) can be freely used under Attribution-ShareAlike license, unless stated otherwise. Cite this article:
Windows 1.0 Facts for Kids. Kiddle Encyclopedia.