Winnona Park is a historic neighborhood in the southeast corner of the Atlanta, Georgia suburb of Decatur. It is listed as a historic district on the National Register of Historic Places,

Winnona Park is located south of downtown Decatur; west of the Village of Avondale Estates, Georgia and the Forest Hills subdivision; and east of Decatur's Oakhurst community. It primarily consists of residences, but is also known as the home of Columbia Theological Seminary. Its rough boundaries are Mimosa Drive and the Decatur city limits on the south; East College Avenue and the railroad tracks on the north; South Candler Street on the west; and South Columbia Avenue on the east. In addition, the commercial buildings on the east side of South Columbia Ave. at East College Ave. have historically been part of this community. This commercial cluster historically housed the neighborhood pharmacy, gas station and barbershop.

In addition, the Forrest Hills community east of South Columbia Avenue is located in unincorporated DeKalb County, and is not considered part of Winnona Park. However, the City of Decatur announced in 2008 that they were considering the annexation of Forrest Hills. 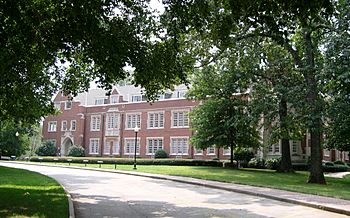 Winnona Park contained farms and estates in the 19th century. "Winnona" is named for the Winn family, who came to DeKalb County, Georgia in the first half of the 19th Century. James J. Winn was a clergyman and a surgeon in the C.S.A. His son-in-law, George Bucher Scott, began the development of Winnona Park. The 1868 farmhouse of another early settler, James C. Avary, still remains on South Columbia Drive. The "Avary-Fulton House", named after the Avary and Fulton families (that constructed and later purchased the home, respectively), was part of a farm that listed 19 slaves in the 1860 census.

During the U.S. Civil War, Union troops first occupied Decatur in July 1864. An 1864 map of Decatur shows Union trenches along East College Avenue, from South Columbia to Adams Street, just south of the railroad tracks. This gave the Union troops strategic control of the rail line. The Union troops, under General Schofield, were driven north through Decatur to the cemetery by Confederate troops under General Wheeler. However, the city fell to the Union again shortly before the Battle of Atlanta.

The North Georgia Conference of the Methodist Episcopal Church, South, purchased a small farm on the east side of South Columbia Drive in 1873 and relocated from Norcross, Georgia. By the start of the 20th century, 125 boys and girls lived at the "Decatur Orphans' Home" (as it was then known). The campus is presently known as the "United Methodist Children's Home".

The development of Winnona Park as a residential area began in the early 20th century. George B. Scott, a member of the Scott family that founded Agnes Scott College and Scottdale Mills, purchased the property from Dr. James Avary and began developing it.

The earliest business district began at East College and South Candler.", In 1913, Joseph Hughey operated a drug store, which was across the railroad tracks from Decatur's train depot. (This location now houses Farmstead 303.) In 1923, the Winnona Park Elementary School was constructed; the original school building is still used by the City of Decatur Schools and is the centerpiece of the community. 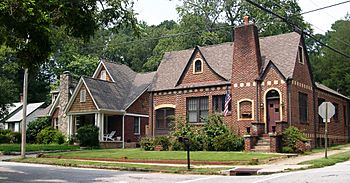 Winnona Park is near major transportation arteries, but has a limited number of roads connecting it to downtown Decatur due to the east-west rail line.

All content from Kiddle encyclopedia articles (including the article images and facts) can be freely used under Attribution-ShareAlike license, unless stated otherwise. Cite this article:
Winnona Park Historic District Facts for Kids. Kiddle Encyclopedia.