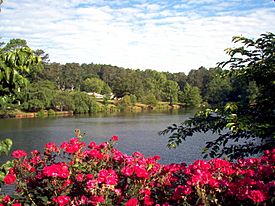 Avondale Estates is a city in DeKalb County, Georgia, United States. The population was 2,960 at the 2010 census. It is part of the Atlanta metropolitan area and is near Decatur.

In the 1890s, lots were sold in the area which was known as Ingleside.

Avondale Estates was founded in 1924 by George Francis Willis, a patent medicine magnate, who purchased the entire village of Ingleside to create a planned community. The city was named after Stratford-upon-Avon, England, birthplace of Shakespeare. Downtown buildings were designed in a Tudor style to reinforce this image, as were many of the houses in the city. Community amenities such as a lake, tennis courts, a clubhouse, parks, and a swimming pool were built for residents.

All content from Kiddle encyclopedia articles (including the article images and facts) can be freely used under Attribution-ShareAlike license, unless stated otherwise. Cite this article:
Avondale Estates, Georgia Facts for Kids. Kiddle Encyclopedia.