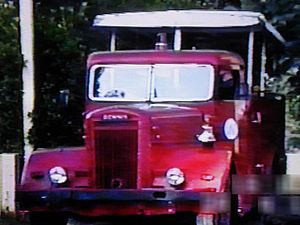 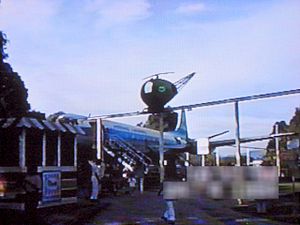 The helicopter monorail and the Vickers Viscount propeller plane 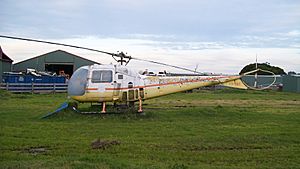 The helicopter at its present site on Dandenong-Frankston Road.

Wobbies World was an amusement park which operated from about 1980 to the late 1990s in the Melbourne suburb of Vermont South, Australia.

The park consisted of many custom-built attractions, most slow moving and aimed at very young children. The park had some characteristic modes of transport including a helicopter "Whirliebird" monorail circuit, mower motor driven 6 wheeler ATVs, a real Bell helicopter refurbished as a ground-mounted simulator, a "Splashdown" mini log ride, a mini-golf course, trampolines, a ball pit, several food and drink kiosks, a miniature train circuit, a miniature car circuit, four Melbourne W2 class trams and a large Vickers Viscount propeller plane fitted out as a movie-projector simulator. The plane now resides at the Australian National Aviation Museum, in Moorabbin, while the Bell helicopter is dismantled and currently sits in a paddock on Dandenong–Frankston Road at 38°03′57″S 145°12′02″E﻿ / ﻿38.06579°S 145.20047°E﻿ / -38.06579; 145.20047﻿ (Former Wobbies World Bell helicopter). One of the Whirliebird helicopters now resides in the front yard of a private residence [1]

Despite memorable television advertisements over the decades, the park slowly deteriorated in the mid to late 1990s and had closed down by the end of the decade. Its demise has been linked to the high entrance fee for the time ($36 for a family of four in 1994) and the charging of separate fees to use some of the attractions .

A plant nursery and the Saxon Wood town house estate occupied the Springvale Road site, but the entrance gate (without road), concrete castle, bridges, a train station, the Birthday Room and the miniature golf course from the former amusement park still remained within the nursery.

In September 2012, the state government announced that a new Forest Hill police station was to be built on the site. The plant nursery has now closed.

The site is now the location of the new Forest Hill Police Station.

The park was almost certainly being satirised by the Melbourne-based TV sketch comedy show The Late Show, in recurring sketches entitled Pissweak World, consisting of fictional low-budget TV commercials for various amusement parks under the Pissweak brand, which had a variety of disappointing rides and unimpressed patrons. The style of the satirical advertisements was reminiscent of the Wobbies World TV commercial, which did not have sophisticated production values.

All content from Kiddle encyclopedia articles (including the article images and facts) can be freely used under Attribution-ShareAlike license, unless stated otherwise. Cite this article:
Wobbies World Facts for Kids. Kiddle Encyclopedia.