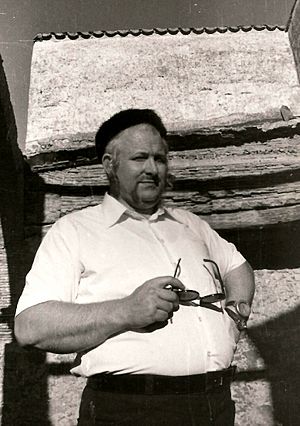 Wolf Vostell (14 October 1932–3 April 1998) was a German artist who made arts in many forms including sculpture, video art, and installations. He was an important artist in the second half of the 20th century. He believed that art should take place in the street, and that the audience should be involved. One of his works, called 130 kms per hour, was a crash between a train and a car.

All content from Kiddle encyclopedia articles (including the article images and facts) can be freely used under Attribution-ShareAlike license, unless stated otherwise. Cite this article:
Wolf Vostell Facts for Kids. Kiddle Encyclopedia.