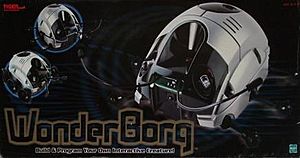 The WonderBorg (Japanese: ワンダーボーグ, Hepburn: WandāBōgu) is a programmable consumer robot kit first released for the Bandai WonderSwan and Microsoft Windows PCs in 2000. It is intended to match both the external appearance and mode of transport of a beetle, with functioning antennae and a six-legged design.

The WonderBorg was available in two retail configurations, with compatible tools for WonderSwan and PC, respectively. The WonderSwan version included a special cartridge with the software necessary to program the WonderBorg and an embedded infra-red transmitter, while the PC version shipped with a software CD for Windows and an infra-red transmitter to connect to a PC via serial port.

The WonderBorg itself requires assembly, and can be customised somewhat, with possible configurations involving differently sized gears favouring torque or speed, and wheels to replace the robot's usual six-legged design. Decal stickers were also included, to allow superficial decoration. Once assembled, the WonderBorg is powered by three AAA batteries and reacts to its environment using seven sensors:

Using its two independent motors (left and right), the WonderBorg is able to move forward, reverse, turn while moving forward or backward, and rotate in place. Its main processor is an Elan EM78P451AQ (RISC-like 8-bit microprocessor).

Both the WonderSwan and PC versions are bundled with specialized WonderBorg programming software known as Robot Works. Rather than requiring the user to learn a complex programming language, the WonderBorg program is written using a graphical user interface, in which instructions for the robot are laid out in a grid. On one side of the grid the WonderBorg's various sensors can be laid out, with those higher on the grid taking priority. The robot is then given instructions on how to react to each trigger. The WonderSwan version additionally included a "pet" program, in which the WonderBorg would behave similarly to Bandai's prior Tamagotchi, a mode omitted from the PC version.

All content from Kiddle encyclopedia articles (including the article images and facts) can be freely used under Attribution-ShareAlike license, unless stated otherwise. Cite this article:
WonderBorg Facts for Kids. Kiddle Encyclopedia.