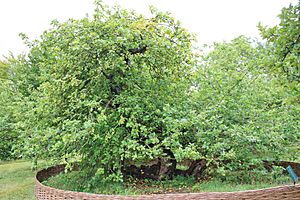 Woolsthorpe Manor in Woolsthorpe-by-Colsterworth, near Grantham, Lincolnshire, England, is the birthplace and was the family home of Sir Isaac Newton. He was born there on 25 December 1642 (old calendar). At that time it was a yeoman's farmstead, principally rearing sheep.

Newton returned here in 1666 when Cambridge University closed due to the plague, and here he performed many of his most famous experiments, most notably his work on light and optics. This is also said to be the site where Newton, observing an apple fall from a tree, was inspired to formulate his law of universal gravitation.

Now in the hands of the National Trust and open to the public all year round, it is presented as a typical seventeenth century yeoman's farmhouse (or as near to that as possible, taking into account modern living, health and safety requirements and structural changes that have been made to the house since Newton's time).

New areas of the house, once private, were opened up to the public in 2003, with the old rear steps (that once led up to the hay loft and grain store and often seen in drawings of the period) being rebuilt, and the old walled kitchen garden, to the rear of the house, being restored.

One of the former farmyard buildings has been equipped so that visitors can have hands-on experience of the physical principles investigated by Newton in the house.

It is a Grade I listed building.

The apple tree that inspired Isaac Newton to work on law of universal gravitation is still alive after over 400 years, attended by gardeners, secured with a fence, and cared for by National Trust for Places of Historic Interest or Natural Beauty.

All content from Kiddle encyclopedia articles (including the article images and facts) can be freely used under Attribution-ShareAlike license, unless stated otherwise. Cite this article:
Woolsthorpe Manor Facts for Kids. Kiddle Encyclopedia.