Woolston is a light industrial and residential suburb of Christchurch in the South Island of New Zealand. It is situated three kilometres southeast of the city centre, close to major arterial routes including State Highways 74 and 76 to Banks Peninsula. The Heathcote River flows through the suburb. 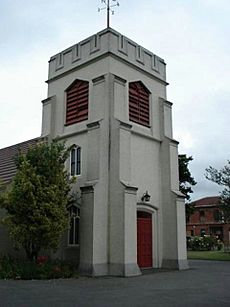 In pre-European times the local Māori people gathered food from the mudflats at Ferrymead. The Māori name for the mudflats was "Ohika paruparu" (meaning women gathering shellfish often sank to their thighs in the mud). Some early European records name the western area of Woolston as Roimata, meaning teardrop in Māori. To this day some land titles in this area reference Roimata as their location. More recently the name has been revived by the Roimata Community Incorporated Society (Roimata Community Inc.), which is a geographically and community-based organisation working in Roimata. Its boundaries are defined as Ensors Road, Brougham Street, Ferry Road and Richardson Terrace.

One of the first signs of a growing European community in the Woolston area was the establishment of a Christian church, the Anglican Parish of St John the Evangelist Woolston, which belongs to the Christchurch diocese. The origins of the Parish date back to 1857 when the first Cob Church was built on the current site. In 1882 a new timber church was built. In 1960 the existing concrete Church building was built and dedicated (consecrated 1963).

Woolston initially belonged to the Heathcote District. In the 1850s and 1860s, wharves along the Heathcote River were used by small ships to service the area. Before the Lyttelton Rail Tunnel was opened in 1867, all the incoming trade arrived in Ferrymead and was transported through Woolston (along Ferry Road) into Christchurch. The road went from the wharf in Lower Heathcote to what is now the corner of High and Madras Streets. The area became quite industrialised after the tunnel opened. Ferry Road later carried the tramlines to Sumner. 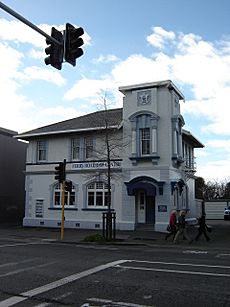 Up until early 1870 the area was commonly referred to as Lower Heathcote. At a meeting about the Heathcote Road drain a local store owner, Joseph Harry Hopkins (1837–1910), named the area Woolston after his birthplace Woolston in Southampton, England. On 16 June 1870, in response to a petition to the postmaster-general, Julius Vogel, objecting to the post office being called Ferry Road, the name Woolston was gazetted. Woolston became a district in 1882, and remained a self-governing borough until 1921, when it was amalgamated with Christchurch.

Joseph Harry Hopkins (1837–1910) was a shopkeeper and postmaster in Woolston who established the Woolston Emporium in 1863. With a building footprint of 5,600 square feet (520 m2), second floor storage and cellar accommodation, this was a rather large store for its time. The Woolston Emporium had six departments: drapery, clothing, boots, grocery, crockery, ironmongery, and a corn store. Hopkins Street, named in 1924, commemorates Joseph Hopkins.

Evangelical leader William Orange was born at Woolston in 1889. 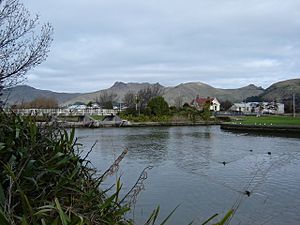 The Heathcote River provided Woolston much needed water for industries like wool scouring, which needed plentiful water. In 1966 the Woolston industrial sewer was built, and up until that time the river had become increasingly polluted.

Flooding had also become a problem and in 1986 the Woolston Cut began to allow flood waters to bypass a long loop of the river. The 510 metres (1,670 ft) long project, which cost NZ$2m, had as a consequence that the trees on the riverbank died as far upstream as the Opawa bridge, and that banks collapsed. Extensive investigations revealed that the trees died from salt water travelling further upstream with every tide (with the salt killing the trees), that the soil structure changed (a sodium / calcium exchange in the clay molecules weakened the soils) and the Tunnelling mud crab had extended its range up the river, further weakening the banks. As a mitigating measure, the Woolston Tidal Barrage was built at the upstream end of the cut, which is only opened in time of floods. During normal flow regimes, the Heathcote remains to flow through what is called the Woolston Loop. 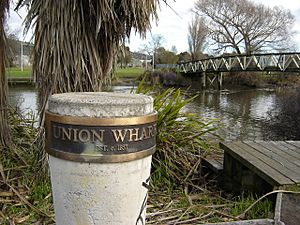 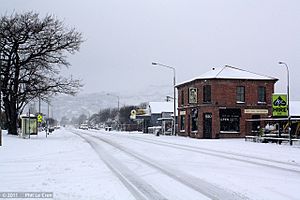 Woolston during the 2011 New Zealand snowstorms.

In later years Woolston's close proximity to the Lyttelton rail line continued to sustain Woolston as a prime location for industry. Over the 20th century the area grew to become the centre of the New Zealand rubber industry. Other industries grew here and included a nugget factory and a gelatine and glue works. Many of these businesses are still present in one form or another. Woolston hosts Christchurch's largest container terminal.

Residential growth from the city gradually moved out through the Woolston area and it is now well merged with Christchurch City. Te Ara, the on-line Encyclopaedia of New Zealand, says that "Factory workers living nearby gave Woolston a strong working-class identity." The area struggles to live up to this positive idea in the present day as there is a significant short term, transient, population.

Woolston is home to The Woolston Drivebys, an indoor football team. The Woolston Brass Band, established in 1891, has gained a national reputation and has won many competitions.

Chichester Street is a quaint inner Woolston street consisting of many original homes built circa 1920. Many of these are still original villas with rimu tongue and groove flooring and high stud ceilings. These have risen in demand since the earthquakes, raising the median sale price of the area.

Prior to the February 2011 Christchurch earthquake, the following heritage buildings were listed with the New Zealand Historic Places Trust:

Woolston has become a retail hub in recent times. Attractions such as the Tannery has visitor numbers at an all-time high, pumping money into the local economy. The Tannery is a boutique shopping emporium on the banks of the Heathcote River and includes a number of boutique shops, bars, restaurants, and a cinema. Further east, the Woolston Village boasts around-again cycles, a brand new supermarket, various takeaways, bars, and restaurants.

All content from Kiddle encyclopedia articles (including the article images and facts) can be freely used under Attribution-ShareAlike license, unless stated otherwise. Cite this article:
Woolston, New Zealand Facts for Kids. Kiddle Encyclopedia.