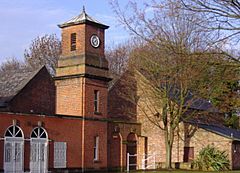 Worden Park is a large area of parkland situated on the outskirts of Leyland, a town in the borough of South Ribble, Lancashire, England. It is less than a quarter of a mile from the town centre. 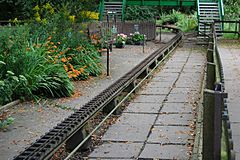 Worden Park is very popular with dog walkers. Dogs are welcomed throughout the park and there are bins around the park for disposing of dog litter. There is a dog-washing shower situated next to the main parking area. The large expanse of parkland makes it very appealing for dog walkers, especially the wooded area to the south. The Shaw Brook, which runs through the wooded area, is a safe place for dogs to swim.

Each year on or around 5 November, Worden Park plays host to one of Lancashire's gatherings of Guy Fawkes revellers. The local Round Table group organise the event and proceeds are used for charitable and local good causes.

There are two free car parks, both reached from the entrance on Worden Lane. During the busy summer months an overflow car park is opened next to the main car park.

The park is in walking distance from the Tesco supermarket and the town centre.

Worden Park is on the edge of Leyland and is surrounded on three sides by housing estates.

All content from Kiddle encyclopedia articles (including the article images and facts) can be freely used under Attribution-ShareAlike license, unless stated otherwise. Cite this article:
Worden Park Facts for Kids. Kiddle Encyclopedia.